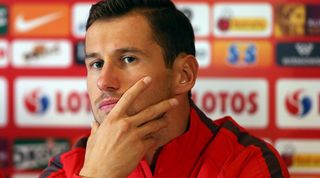 Still only 19, Ruben Neves isn't yet the finished product – which is exactly what makes his recent form so impressive. A teenager who plays like he’s in his late-20s, the Porto man possesses confidence in abundance, as well as a wonderful blend of flair, strength, elegance and footballing intelligence. One can only imagine what he’ll look like when he’s matured in five years or so.

Neves’s emergence is evidence that Porto’s knack for honing young talents is alive and well. The teenager replaced Casemiro at the base of midfield after the Brazilian returned to Real Madrid last summer, with his displays this term strong enough to ensure his predecessor hasn't really been missed.

Some diligent defending against Chelsea

Neves is further along than would ordinarily be expected for someone his age, something that was noticeable when he made his Champions League debut in 2014 at the age of 17, becoming the youngest Portuguese player to play in Europe’s primary competition – breaking the record previously held by one Cristiano Ronaldo.

Modern football demands a lot of its defensive midfielders, but Neves has proven himself up to the task so far. His positional awareness and intelligence allow him to weld the Porto midfield together effectively, while he’s also capable of distributing the ball – both short and long – with accuracy.

Neves is a defensive midfielder who can dispossess opponents and then make his way through compact spaces with silky dribbling. Give him space and he'll burn you with an incisive through-ball; close him down and he’ll slide past you in the most unorthodox of ways.

Kante’s name has spread far and wide in the last few months, his performances in the Leicester engine room earning him admirers from across the continent and beyond. Whether or not the Foxes secure the Premier League title this term, they’ll have to fend off some of Europe’s biggest outfits for their top players this summer, with the France international likely to be on many a shopping list.

At times, Kante can be unplayable; he may only be 5ft 6in, but the former Caen midfielder is strong and difficult to get past, with his muscle evidenced by the fact that no one in England’s top flight has made more tackles or interceptions than the 25-year-old.

Parallels have been drawn with Claude Makelele, the Frenchman who revolutionised the holding role; and like the former Chelsea and Real Madrid anchor, Kante is terrific at standing his ground, sniffing out danger and dispossessing opponents.

There’s even an argument that Kante is better than Makelele on the ball, with his dribbling and distribution superior to that of his countryman. He’s more than capable of contributing in attack as well as defence, with the Leicester man proving himself to be a multi-dimensional presence on the field.

Sevilla’s Polish midfield general may already be 26, but his best years are still ahead of him. The Spanish side have had a disappointing season in La Liga – remarkably, they still haven’t won away from home – but Krychowiak has been the best defensive midfielder in the country this season, excepting the extraordinary Sergio Busquets.

Other clubs have taken note of that fact, with Krychowiak likely to be a target for many teams in the close season. The Pole is a real pest of an opponent, the type of player who you’d hate to play against but would take comfort from seeing him line up alongside you. A relentless workhorse with acute positional awareness, Krychowiak is adept at recovering loose balls and suffocating opponents with his pressing.

Krychowiak gets the better of Lionel Messi

Kalidou Koulibaly: All about the Napoli giant who's luring Man United and Bayern scouts

Mahmoud Dahoud: The Pochettino-targeted starlet who could become a complete midfielder

Carvalho is a hound, a holding midfielder who regularly snuffs out opposing attacks with his interceptions and sharp reading of the game.

At 24, the Sporting Lisbon man has many promising years ahead of him and will be linked with an array of clubs this summer; indeed, he’s already been spoken of as a target for Arsenal, Manchester United, Real Madrid and PSG, and is unlikely to stay in Portugal for much longer.

Carvalho doesn’t quite have the aesthetically pleasing style that his countryman Neves possesses, and his technical ability is somewhat limited relative to the more creative midfielders in the game today, but what he does have going for him is his capabilities as a destroyer. Carvalho is superb at breaking up attacks before they reach the danger zone, while he can also slot in deeper and play as a central defender.

Though not particularly adventurous with the ball at his feet, he’s far from a liability in an attacking sense. Upon recovering possession, Carvalho will typically make a simple pass to one of his more creative team-mates, but he’s not afraid to occasionally hit longer balls forward to begin an attacking transition.

Carvalho’s also extremely difficult to shrug off the ball, and is known to make powerful, driving runs through the centre of pitch, some of which have led directly to goals.

His offensive ability may not be the best around, but any side looking to tighten up the base of midfield and better protect their defence should take note of the Portuguese’s prowess as a prowler in front of the back four.