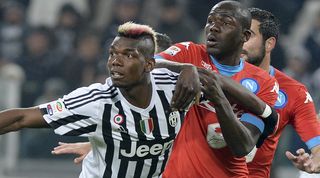 There is no denying the impact of Maurizio Sarri at Napoli this season, with the former Empoli coach helping the Partenopei to quickly establish themselves as genuine contenders for the Serie A title after replacing Rafael Benitez last summer.

Gonzalo Higuain has rightly been lauded for his contributions – he currently leads Europe’s top five leagues with 29 goals in just 30 appearances, a staggering return that is undoubtedly powering their Scudetto push. Yet while the Argentine has followed compatriot Diego Maradona in giving the people of Naples a reason to dream, perhaps no player embodies the club’s transformation more than defender Kalidou Koulibaly.

He landed in southern Italy back in May 2014 after a £5.1 million move from Racing Genk, but failed to convince anyone on the peninsula that he was the answer to the club’s defensive woes.

The Senagalese giant looked awkward and ungainly, was often caught out of position and appeared to lack either the tactical discipline or concentration necessary to succeed in Serie A. It appeared he would move on – but Sarri had other ideas.

“The transfer market is for people who don’t want to talk about football,” he snapped when asked if defensive reinforcements would arrive, preferring instead to work with the players already at his disposal. “It’s something that bad coaches seek refuge in.”

Last term, opponents scored 54 goals against the Partenopei, but they have conceded just 24 times in 2015/16 while recording 12 clean sheets – four more than in the whole of the previous campaign.

Having expressed his admiration for former Juventus and Parma star Lilian Thuram, Koulibaly now appears to possess all the tools to emulate his hero and establish himself as one of the best defenders in European football.

After that struggle to find his best form under Benitez, Koulibaly was linked with the likes of Norwich, Southampton and Everton but can expect a vastly different list of suitors should he opt to leave the Stadio San Paolo at the end of the current campaign.

Indeed, the lack of top-class central defenders expected to be available this summer makes him a highly sought-after commodity, with Bayern Munich already being mentioned as a possible destination. The Bundesliga giants can expect some serious competition for his signature, with transfer expert Gianluca Di Marzio among those reporting interest from Manchester United.

He is among a number of sources to note the presence of scouts from Old Trafford making their way to Naples, with the 24-year-old defender the man seemingly drawing their attention.

Known as 'K2', Koulibaly stands a mountainous 6ft 5in tall and is a robust, physically imposing central defender. He’s won an average of 2.8 headed duels per game across his 26 Serie A appearances in 2015/16, just one of a number of categories where the 24 year old is recording career-best statistics.

Under Sarri’s diligent guidance, Koulibaly has averaged 2.3 tackles, 2.7 interceptions and 3.8 clearances per game, while his passing has improved immeasurably.

Yet perhaps his biggest improvement has been in terms of positioning – he's now seemingly always in the right place to steal the ball away from an opponent rather than attempting to recover as he always had to in the past.

While his decision making and ability to read the game are markedly better, Koulibaly remains somewhat ungainly and is often guilty of committing unnecessary fouls. No defender in Serie A tops his tally of 54.

It’s a trait he needs to iron out quickly, and only four players have received more yellow cards than his current total of nine, a number that is far too high given Napoli’s reliance on him this term.

Neat in possession and dominant in the air, Koulibaly has yet to transfer those abilities into any form of attacking prowess, with just one goal in his 74 appearances for the Partenopei.

His long-range passing could also improve, with just 2.7 of his successful balls per game being over a longer distance than 15m. That could bring some much-needed variety to his play and make him a better-rounded player.

Although no longer guilty of losing his man regularly, Koulibaly is still prone to rare moments of inexplicable naivety, something he and Sarri have clearly worked on eradicating and far less of an issue than it was 12 months ago.

“I've also been following Kouilibaly,” Didier Deschamps said on the Canal Football Club TV show a few weeks ago, the French coach blissfully unaware that the defender had amassed five caps for Senegal.

It was an honest mistake, with the 24 year old having been born in the Lorraine region to African parents but opting to represent the Lions rather than les Bleus.

“For me, he's among the best in the world and he can still improve. He's matured in everything; character, technique... he now comes out with the ball in such an impeccable way and is always physically dominant. I think Napoli have uncovered a champion.”

Last month, Koulibaly was at the centre of ugly scenes at the Stadio Olimpico in Rome when Lazio supporters began to racially abuse the defender every time he touched the ball. The chanting became so prevalent that the referee was forced to stop the match for around three minutes, with play only resuming after lengthy discussions between the officials and coaches.

“I want to thank the Lazio players, but especially the referee [Massimiliano] Irrati for his courage,” Koulibaly wrote in a social media post shortly afterwards.

“I thank my team mates, the public and our fans, who have been a great support against these ugly chants. I want to thank everyone for the messages of solidarity that I have received.”

Lazio’s Keita Balde was among the most prominent supporters, leaving the field with an arm around the opposition defender, but it was the Napoli faithful who made the biggest statement.

As their side took on Carpi just a few days later, thousands of Partenopei fans held up images of the Senegal international and left a banner at the club’s training ground which simply said “Honour your colour Koulibaly”.

With rumours of a summer exit beginning to grow stronger, it seems Napoli have moved to strengthen their position in any transfer negotiations by offering an extension to his current contract which expires in 2019.

However, Koulibaly – who is clearly outperforming the terms of that previous agreement – was initially offered an extension back in February, only for his agent to rebuff the approach with some remarkably blunt comments to the French media.

“He has a contract that allows him to stay in Napoli for some time, but if he receives an offer from a club that plays the Champions League every year, he'll certainly consider it,” Koulibaly’s representative Bruno Satin told So Foot.

“Napoli negotiate some big transfers, but they are still a small club in terms of their infrastructure. There are electric cables everywhere in the stadium, so you can imagine the fear of getting electrocuted when it rains.”

Going on to “doubt they have this kind of problem at Bayern Munich,” Napoli may have some serious work to do if they are to hold on to their defensive linchpin.