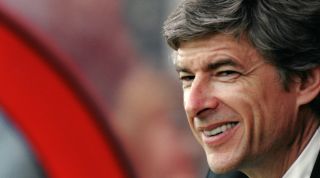 Bon anniversaire, Arsene Wenger. The former Arsenal manager may have had his 70th celebrations slightly dampened by the Gunners' 1-0 defeat away to Sheffield United last night.

As they let down their boss of 22 years on such a milestone for him, we here at FourFourTwo thought that we would step in and honour one of the Premier League's greatest managers.

So we put together a mammoth quiz that will keep you going for 20 minutes. This honour's one of Wenger's biggest achievements: his longevity.

What we've done is collect the name of every single Premier League manager during Wenger's reign – ranging from October 1996 to May 2018.

It's not so much if you can get all of the below – you won't, unless you're some kind of android – but how many you can pick off before the time runs out.

Fancy it? Of course you do – we can hear those knuckles cracking from miles away. Once you've finished, drop us your scores @FourFourTwo and we'll retweet them to pit you against our other followers. Then challenge your mates to see who's the biggest brainbox of your mob.

* Caretaker spells not included, regardless of how long said caretaker was at the helm (Guus Hiddink) or how many times they've done it (Keith Millen).