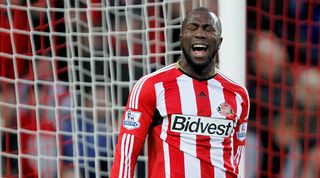 Note: all data taken from STATS, players ranked on their goal-to-minute ratio over a minimum of 50 Premier League appearances

In a similar way that the office goldfish and Seth John's wage negotiations have epitomised Leeds United's fall from grace, Utaka has become part of Portsmouth's own mythology. That he denied the rumour he was earning more than Arsenal captain Cesc Fabregas during his goal-shy stint on the south coast is neither here nor there.

Accurate or not, the story speaks to a grander truth of calamitous financial recklessness. Utaka wasn't terrible for Pompey – he even laid on the goal that won them the FA Cup – but he will forever be remembered as symbolic of the club's Icarus-like idiocy.

A semi-legendary star of Barry Fry’s Barnet side of the early ’90s, Clarke made his name in the top tier with Wimbledon, where his no-frills, hard-running MO fitted in a treat despite his relative paucity of goals.

By the end of his seven years with the Crazy Gang, he’d scored just 23 times. Yet he was a firm fixture in a squad that had reached two cup semi-finals (he arrived too late for the dethroning of the Culture Club) and finished sixth in the top flight – not bad going for a player whose career started in north London’s Greek Cypriot park leagues.

The concept of 'failing upwards' affects a lucky few, but alongside the likes of Boris Johnson and James Corden, we can add the perennial Barcelona loanee and specialist in flattering to deceive, Gerard Delofeu. His initial spell at Goodison, which bore three goals in 25 outings, wasn't enough to deter Sevilla from taking him on the following season, where he both won a Europa League medal and was voted into Marca’s worst team of the season.

Another two uninspiring years on Merseyside (and two goals in 37) led to him being snapped up, inexplicably, by Milan. A middling half-season there resulted in the customary loan being eschewed for now. So naturally the attacker has been spending recent months playing semi-regularly alongside Messi, Suarez & Co., with a La Liga medal almost certainly awaiting come May. Funny old world.

Not, it must be admitted, a great goalscorer. But Ruiz was nonetheless no stranger to the occasional great goal during a four-season spell with Fulham in which he provided the Craven Cottage crown with performances that were the dictionary definition of ‘mercurial’.

On the one hand, entire swathes of a season would go by without the Costa Rican stroller so much as breaking into a light jog. On the other hand, there were the caressed curlers, impish lobs, the odd stonking screamer, one goal bent in directly from a corner – and first touches like this. Swings and roundabouts.

Pound for pound, the worst player in Liverpool’s history? Certainly there is a sound case to be made, once inflation is accounted for. After all, not even Andy Carroll managed to see out an entire season without once introducing ball to net.

Diouf did all that and more over the course of nine years in the Premier League. He arrived for a £10m fee in 2002, the same year he was named African Footballer of the Year, but finally left English football – after a series of middling mid-table stints in his post-Liverpool days – having amassed more than double the number of cards (58) as he had goals (28).

Was last spotted in the Malaysian Premier League, enjoying a three-match, goal-a-game Indian summer in 2015. That’s the real quiz.

Yes, Miller’s only two seasons in England’s top flight ended in ignominious, rock-bottom relegations. Yes, he only managed six goals in 55 appearances for Dave Jones’s Wolves and Paul Jewell’s Derby County. Yes, his time with the latter included that now-legendary season of horror, 2007/08.

However, those six goals included a winner against Manchester United, a last-minute equaliser against Liverpool and a majestic swerving 30-yard half-volley on his Derby debut that brought his side their sole win during that aforementioned nightmare season. So it wasn’t all bad.

Aliadiere, poor lad, had the misfortune of emanating from France’s then-fabled Clairefontaine academy just after the country’s 1998 World Cup win; of scoring four goals in his first six League Cup outings for Arsenal as a spritely teenager; and of becoming quite decent on Championship Manager 01/02.

In isolation, any of these three factors could have been overlooked. Taken together, they raised expectations starkly high for a player who, it turned out, was really not much chop. As is borne out by a nine-year Premier League career that encompassed 113 appearances and just the eight goals.

Rosenthal was a pretty shrewd signing by Kenny Dalglish and Liverpool. He scored a perfect hat-trick on his first start for the club, and seven in his first eight games at the back end of the club’s title-winning 1989/90 season.

The Israeli was a serviceable utility attacker during his three years at Tottenham, too. He even scored the Second Division’s goal of the season in 1997/98, helping Watford romp to the title. But you don’t remember any of that, do you? You just remember that miss against Aston Villa. Life can be cruel.

‘I saw Carl Leaburn score’, read the t-shirts they used to sell outside The Valley. Leaburn was a cult hero at Charlton, his selflessness and indefatigable leg-work doing plenty to offset a glaring lack of goals.

Both strike rate and reputation were transported to Wimbledon when the striker joined in 1998. If anything, his trifling goal haul only added to his countercultural popularity. Rumour has it that he appeared in an episode of EastEnders, while Clive Mendonca rates him as his greatest ever strike partner. Who need goals anyway?

There’s plenty to admire about Boyd’s career. It began with five seasons in the Conference with Stevenage, before a slow clamber up the division saw him establish himself in the top flight with Hull and then Burnley.

Nine goals across three Premier League season may not seem like a lot, but consider that his teams – relative minnows – didn't lose any of those nine games, and the picture changes somewhat. His half-volley for Burnley to seal a smash-and-grab 1-0 when Manchester City came to town was a particular highlight. Goals may not be Boyd’s thing, but that’s not to say he’s shy of scoring important ones.

Murphy is part of a hallowed lineage, alongside the likes of Robert Earnshaw, Danny Graham and Sylvan Ebanks-Blake, that need only be known as the ‘Championship striker’. Such players are deadly in the second tier, desperate in the first, with little middle ground to separate the two.

A fiery baptism for Premier League life came as part of Sunderland's squad of 2005/06 – his sole goal salvaging his team a rare point – before another two seasons back in the top tier yielded a further three in 51 (Sunderland, bizarrely, winning all three games he scored in).

The difference between that strike rate and his 40 league goals over two seasons for Ipswich in recent years perhaps explains Rafa Benitez’s recent decision to sell up once Newcastle won promotion last summer. True to form, Murphy continues to plunder goals at a reputable rate for Nottingham Forest.

Smith made his name as part of a Watford side that laboured to a 20th-placed Premier League finish in 2000, though a couple of goals – including an eye-catching strike against runaway winners Manchester United – wasn’t bad going for a wide-eyed young striker.

By the time he returned to the top flight six years later, though, stints under Alan Pardew and Billy Davies had turned him into an earnest wideman – borne out by a solitary strike in 32 outings – before a bizarre January move to Avram Grant’s doomed Portsmouth side of 2009/10 did little to rise hopes of either party remaining in the top flight.

His best spell came as a bit-parter in QPR’s relegation-dodging campaign of 2011/12, when he contributed goals to two precious wins before making the wise decision to jump ship that summer.

Fagan’s introduction to Premier League life was not an especially pleasant one: 22 games as part of Derby's historically woeful side of 2007/08, in which he scored zero goals.

Somehow, this brought him to the attention of Hull, who in summer 2008 were passing Derby on their way through the Premier League’s revolving door. Yet Fagan’s three goals in the 2008/09 season brought Hull two points which they would have been relegated without. His two strikes the following year were of less use, though, and the forward wound down his career with stints in Bradford, Bury, Gillingham and – why not? – Brunei.

A further 26 outings for Wednesday only brought one goal, though, while a brief (and goalless) stint at Leicester a couple of years later led to him playing up front alongside Ade Akinbiyi – a pairing that was less a strike partnership than a piece of existentialist performance art. Further proof that his true level was a rung or two below the top tier followed when a serviceable season during Stoke’s promotion campaign was promptly followed by a goal-free, 30-outing Premier League campaign.

Transfers are dangerous things. While a smart one can launch a career into the stratosphere, Cantona-like, the wrong move at the wrong time can spark an overnight transformation from perfectly decent footballer to bungling clown.

For proof, look no further than Jozy Altidore, whose output for AZ Alkmaar before his notorious two-year stint at Sunderland was really rather good. Yet a 2009/10 loan at Hull (28 appearances, one goal) was a pre-warning: for the Black Cats he embodied all the worst traits – shanked shots, pinball first touches, ever-deepening gloom – of a non-scoring striker.

Nephew of Leeds legend Eddie Gray, Andy partook in four separate Premier League seasons, scoring in just one – and just the once.

Ranked! The 15 best Premier League goals of the '90s

10 of football's most eventful (and amusing) debuts

His grimmest spell probably came during that 2005/06 season – his only top-flight campaign as a first-team regular. Then, he was a part of a Sunderland side that set a record for the worst ever season since the Premier League’s inception, picking up only 15 points and three wins all season (then, fortunately for them, Derby came along).

Gray’s sole strike? In a 3-1 home defeat to Charlton. Bleak.