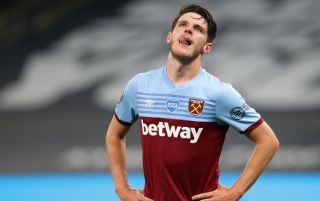 West Ham are probably going to escape relegation. It’s not a certainty yet, but a four-point gap is a chasm at this time of year, especially when the sides beneath them are so poor. Should they survive, it will be a job (quite) well done by David Moyes and an opportunity for the club’s owners to pause for thought before the new season begins.

And it should be exactly that: reflection, not celebration. There is no credit due to them for avoiding relegation and neither is there a pat on the back incoming for sacking Manuel Pellegrini and installing Moyes. Truth be told, West Ham’s ownership are extremely fortunate that they haven’t paid the ultimate cost for their hubris.

Hubris is the right word, too. Most columns about West Ham make reference to the noise they make and the public conduct of their stakeholders, but those themes are detectable in all sorts of other ways too. In the transfer activity, for instance, which continues to be the definition of running before you can walk. Or the wage-spend, which transparently rewards names and reputations, and style over substance.

That’s a particularly discouraging list. Felipe Anderson earns a reported £85,000 per week. Jack Wilshere is supposedly on £100,000. Sebastien Haller and Andriy Yarmolenko both take home in excess of that, with basic wages well into the six figures. Yarmolenko has had some better moments lately, but at 29 he now exhibits his dwindling class in flashes, rather than in the heavy doses of the past and his prime.

Those players aren’t to blame. Rather, the point to make is how few of them have been of influence during this recent stretch. When the dust settles on this season, West Ham supporters won’t be grateful for Wilshere, Haller or Anderson. Or even Pablo Fornals, who has been another crushing disappointment. Instead, they will owe their continuing Premier League status to – among a few others – Michail Antonio, Declan Rice, Jarrod Bowen and Tomas Soucek.

There’s nothing to really bind that group. If there is one commonality, though, it’s that the circumstances by which they each arrived at the club contrast with this sense that, for West Ham, the player they think they need most is always the best one they can afford. In itself, the prevailing belief seems to be that if the club could just have one perfect summer – one pre-season in which all their transfer gambles paid off and all the hired guns fired perfectly in time – then the top-four would be theirs to inhabit.

This season is the latest to confirm that as fallacy. In addition to which, it is Moyes – someone previously discarded to make way for a more alluring alternative – who is extracting these little vestiges of value at the critical moment, and from players who, again, have more of a second billing, behind the stars currently sat on the sideline.

The conclusion isn’t that Moyes is absolutely the right man to lead this team. That remains to be seen; the uptick in performance under him has been marginal and brief. Nor is it that West Ham must never again show ambition in the transfer market. What really matters is that the decision-makers don’t disregard what appears to be working at the moment – certainly in relation to what didn’t work previously.

Buy it on eBay hereView Deal

Compare it to clothes shopping. Just because somebody can literally afford to buy from Knightsbridge boutiques, doesn’t mean that they necessarily should. While the overcoats in Armani are no doubt cut beautifully and made from the finest materials, they’re also of finite practical use and only really suited to being worn in certain situations and by those of a particular size and shape.

Invariably, the people who look best in what they wear are those who recognise what suits them. As a club, over much of the last decade, West Ham have been lacking in that kind of self-awareness – they’re 45-year-old in the artfully ripped jeans and skin-tight T-shirt, oblivious to the way other people shake their head and smile.

Adjusted for football, wearing the right clothes means building a team from players who suit your circumstances. Sebastien Haller doesn’t currently work for West Ham because he’s timid and brittle, and because their predicament depends on a more durable kind of quality that, at this stage of his career, he just doesn’t have. He’s a fedora, Michail Antonio is a baseball cap.

Tomas Soucek is a more valuable influence than Jack Wilshere or Felipe Anderson because he can be depended on. He’s a pair of Timberlands rather than a pair of suede loafers and that kind of utility is more useful in the kind of world that his team currently inhabits. If Anderson and Soucek played for Manchester City or Liverpool then perhaps their roles would be reversed. As it is, in this context, the former is just a vanity purchase, with a tenuous use indicative of the differences between aspiration and actuality.

There are limits to this metaphor, clearly, but it hints at the kind of realisation that needs to take place. When it mattered this season, when the chips were down and it was time to put points on the board, salvation came from those players – and from the manager – who had the most common ground with the club now. It was those who were aligned with the team’s present. The players who shared its objectives and didn’t have reputations impervious to this crisis.

For the future, then, the message is simple: pack for the trip you’re actually going on, not the one you wish you were.

COMMENT The Premier League relegation battle: what managers go through in the race against the drop