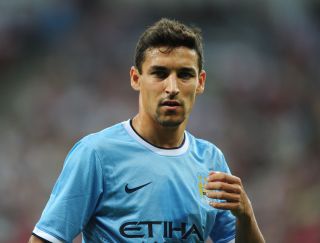 The influx of Spaniards in to the Premier League has been steady since Rafael Benítez turned up at Liverpool in 2004.

Of last season's top seven clubs, all bar Everton had at least one Spanish-born player in their ranks, and with Roberto Martí­nez now in charge at Goodison it seems very possible the Toffees may follow suit. What has increased is the number of new arrivals at teams lower down the table, as the expertise of managers such as Mauricio Pochettino and Michael Laudrup is used to good effect. With the economic difficulties facing clubs in Spain below Barcelona and Real Madrid, it's the perfect hunting ground for a bargain - as Swansea's £2m capture of Michu last summer proved.

Three players who will be wowing Premier League crowds come August are Jesús Navas, Iago Aspas and José Cañas. These signings show the full range of transfer targets that can be attained from La Liga, from mega-bucks deals to free transfers.

Jesús Navas - Sevilla to Manchester City
City have missed A top-class direct winger in recent seasons, and Navas is a clear upgrade on the likes of Adam Johnson and Scott Sinclair. James Milner lacks the pace required to really exploit a high opposition defensive line, while David Silva and Samir Nasri both prefer to cut inside and link up the play. Navas, on the other hand, will give the Premier League runners-up the option to stretch defences.

Arriving from Sevilla, the wide man has previously suffered from chronic homesickness; a problem he is now believed to have overcome. Yet it's still a surprise to see him move to a foreign country, particularly to a city which hasn't always drawn praise from its footballing imports. Carlos Tevez infamously spoke of his dislike of Manchester, citing the weather and a lack of fine dining.

Navas will excite City fans with his close control, speed, and willingness to take on opponents before whipping in a cross, though he may equally frustrate with his eratic shooting and infrequent defensive contributions. He is at his most effective on the counter attack; the 27 year-old was La Liga's top ten for both key passes and dribbles completed in 2012/13.

Iago Aspas - Celta Vigo to Liverpool
How do you replace an adaptable forward with the ability to create something out of nothing, yet also attracts controversy? Easy - sign another one!

Iago Aspas may not be at the same level of Luis Suárez, but the Celta Vigo forward shares a number of traits with the Uruguayn. Both players can occupy a position anywhere across the front, both can play off the last defender looking to get in behind, and both can cause opponents problems by roaming 'in the hole', trying to find the killer pass to a teammate.

Like Suarez, Aspas often drifts into wide areas and exploits space left vacated by full-backs. One obvious difference is their respective approaches to difficult goal scoring situations. Suárez will tend to shoot from any angle and situation - only Cristiano Ronaldo averaged more shots per game in Europe's top five leagues last season; Aspas is more likely to seek out a teammate rather than attempt the near-impossible. The goal that kept Celta in the top flight was systematic of this as Aspas beat one defender then squared the ball to Natxo Insa to finish, it's quite possible Suárez may have taken the shot on himself in such a situation.

José Cañas - Real Betis to Swansea City
Having replaced Joe Allen with a more physical box-to-box midfielder in Jonathan de Guzman, the signing of sees Swansea José Cañas move back to a deeper type of link up player. Should De Guzman make his move from Villarreal permanent, Michael Laudrup will have a number of options at his disposal. It will be important that he maintains balance alongside Leon Britton and not try to field the aforementioned midfielders as part of a central two, as it's quite possible the defensive side of their game would be exposed.

Cañas is an intelligent passer of the ball, who will look to shift the ball out wide quickly to wingers and move the opposition out of shape with what will seem like sterile possession. Defensively he will try to intercept rather than tackle, and providing he is utilised in the right manner, the Swansea faithful will have another Spaniard to embrace. Could bringing in Cañas on a free after the expiry of his deal with Betis be another transfer masterstroke from Michael Laudrup?