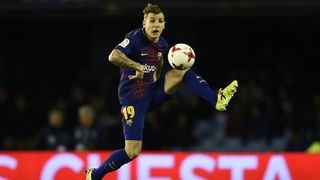 Barcelona left-back Lucas Digne is set to spend three weeks on the sidelines after returning from international duty with France nursing a thigh injury.

Digne started Les Bleus' 3-2 defeat to Colombia last week and was an unused substitute for the 3-1 win in Russia on Tuesday.

Following tests on Wednesday, the 24-year-old was diagnosed with a problem that will rule him out of both legs of Barca's Champions League quarter-final against his former club Roma.

Digne, who has made 19 appearances in all competitions for Ernesto Valverde's LaLiga leaders this season, should be back in contention for the Copa del Rey final against Sevilla on April 21 if his recovery runs to schedule.

Lucas Digne has returned from international duty with the French squad with a thigh injury. According to tests carried out on Wednesday he will be out for around 3 weeks March 28, 2018