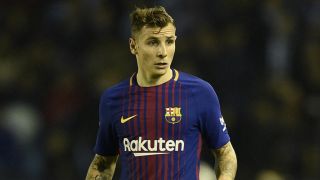 Everton appear on the verge of completing a swoop for French defender Lucas Digne after Barcelona allowed him to leave their California training camp.

Digne, 25, has been linked with the Toffees for several weeks and has been permitted to "finalise his departure" ahead of a reported €25million move.

He was part of France's squad at the 2014 World Cup, but was overlooked for the country's triumphant 2018 campaign.

Everton have also featured in the race to sign Digne's team-mate Yerry Mina, although the Colombia international is believed to favour a move to Lyon should he leave Barca.

travels today to Barcelona with the Club's permission to finalise his departure from the Club. July 29, 2018