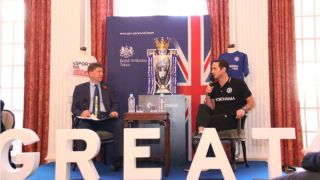 Frank Lampard believes Chelsea will have a better chance of success in the Champions League than Premier League due to Manchester City's immense start to the season.

Pep Guardiola's City have dropped just two points in their 12 league matches this season and have been almost unstoppable in attack, scoring 40 times.

That run of form has seen them open an eight-point gap to Manchester United at the top of the table, with defending champions Chelsea trailing Jose Mourinho's side by a further point.

Chelsea have managed to progress through their Champions League group, however, with the 3-0 defeat at Roma the only major blemish and they are still on track to finish top after Wednesday's 4-0 win over Qarabag.

And Lampard suspects that Chelsea, who face Liverpool in the Premier League on Saturday, are probably more capable of getting close to European success this term than they are domestically.

Speaking thanks to Chelsea club partners Yokohama Tyres, Lampard said: "This year is going to be difficult, I think, because Manchester City started so well.

"The reality is that City have opened up the league and I think the chance for Chelsea will be in the Champions League.

"I think they will be competitive and Chelsea have to be savage to be in the top four at the end of the year, and keep playing Champions League football."

Great game from the whole team and 3 points that take us to the next round Partido muy completo de todo el equipo y 3 puntos que nos dan la clasificación! November 22, 2017

Lampard was not about to label City unbeatable or one of the greatest Premier League sides ever, though, insisting it is still a little premature for any of those grand declarations.

"I think is too early to say," he added. "If they carry on during the season the way they are playing, then of course they are going to put themselves in that bracket.

"There's potential, but it's so early in the season and there are so many things to be seen.

"There are so many great teams [who have played] in the Premier League, not just Mourinho's Chelsea or Alex Ferguson's United.

"They were very strong, so they [City] have to prove more [if they are to be classed as the best ever]."