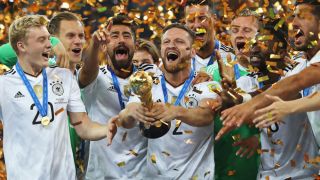 Germany have returned to the top of the FIFA world rankings two years after being dethroned as the number one team.

The world champions were rewarded for winning the Confederations Cup in Russia – despite resting a host of star names - by jumping from third to first, leapfrogging previous leaders Brazil and Argentina, the side who ended their previous reign in 2015.

It means Brazil's stint at the top lasted only three months. They had taken the number one position from their continental rivals the Albiceleste back in April, the first time they had sat first in seven years.

Beaten Confederations Cup finalists Chile drop three places to seven, with the top six now completed by Portugal, Switzerland and Poland, all of whom move up four positions.

Sixth position is the highest spot that Poland, who are unbeaten since Euro 2016, have ever occupied.

Colombia, France and Belgium all fall three places and sit below Chile, while Spain slip out of the top 10 to 11th.

The 1-0 victory was Andorra's first competitive triumph for 13 years and puts them up to 129 in the world.

Hungary, who also lost to Russia last month in a dreadful double-header, drop down 24 spots to number 57.