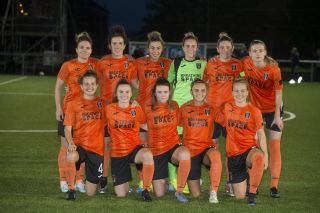 Scottish women’s champions Glasgow City have called in the help of a top sports scientist to ensure their bid for a 14th straight title does not stumble because of the coronavirus.

Andy White, co-founder and director of Athlete Focused, has drawn up a list of tailored workouts for the squad which can be carried out from each players’ homes during the government-enforced quarantine.

Glasgow City boss Scott Booth said: “We looked at ways to bring the club to the next level, and on the top of our list before we began preparations for pre-season was adding comprehensive sports science expertise.

“With our club operating on a hybrid model, many juggle their commitments with work or study and can’t make all our sessions, whilst others are full-time with the club attending all morning and evening sessions.

“This makes it all the more important that there is a strategy in place so that everyone has professional support to be operating at peak performance levels.

“Especially with the current situation, Andy at the team at Athlete Focused have worked with us to ensure that there is nothing left to chance and the players are prepared to hit the ground running once the season resumes, even if we have no idea currently when that will be.”

White was previously head of physical performance at Kilmarnock and a senior coach at the Sport Scotland Institute of Sport, where he advised top performers across a number of sports.

He said: “The players at Glasgow City put in an enormous amount of effort and I was incredibly impressed by their commitment to the process.

“To see their season hanging in the balance after all that preparation is difficult, but I’m proud of how they responded to the challenge.

“Each player’s tailored programme will allow them to maintain the fitness levels reached during pre-season, target weaknesses and ultimately, when it’s time to resume play, be better than ever before.”