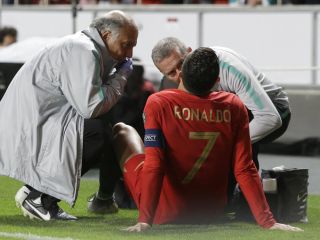 Juventus forward Cristiano Ronaldo suffered a minor thigh injury while on international duty but should not be at risk of missing next month’s Champions League quarter-final meeting with Ajax.

The 34-year-old was withdrawn hurt after 30 minutes of Portugal’s Euro 2020 qualifying match against Serbia on Monday, which ended as a 1-1 draw.

A statement from Juve on Tuesday said: “Cristiano Ronaldo underwent tests in Portugal that revealed a minor injury to his right thigh flexors.

“He will be monitored and subjected to further tests to establish when he can return to competitive action.”

The Bianconeri face Empoli when the Serie A season resumes on Saturday, with games against Cagliari and AC Milan taking place in early April before a trip to Amsterdam to face Ajax beckons on April 10.