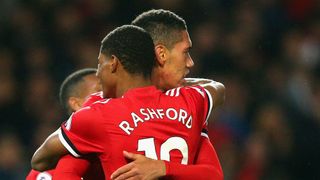 Manchester United must channel the past sides managed by the legendary Alex Ferguson and "stick with" pacesetters Manchester City in the Premier League title race, says Bryan Robson.

Pep Guardiola's City have dropped just two points in 13 matches this season, scoring a sensational 42 goals in the process.

United have been the best of the chasing pack, but still sit eight points adrift of their rivals.

Former United and England midfielder Robson concedes that City are showing few signs of weakness, but believes the Red Devils are not out of the running yet.

Speaking at Football Writers Association North West Football Awards, Robson said: "It's a long hard season, you know. United have had a good season so far under Jose [Mourinho].

"They've put themselves in a good position but City are flying, there's no getting away from that.

"But what you always have to do - Sir Alex Ferguson always used to say this to us when I was a player under him - look they're going really well, just stick with them and be as close as you can be when it comes to Christmas or New Year.

"See how many injuries people get, loss of form, so as long as you're close enough to them to give them a fight, and put pressure on them that's what it's all about."