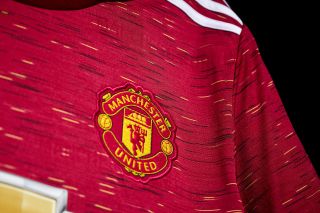 Manchester United have released their new home kit for the 2020/21 campaign, with this year's design inspired by the club’s crest.

The new home shirt, available to order immediately from the adidas store and in shops from August 11, looks to encapsulate the DNA of the club - something manager Ole Gunnar Solskjaer has repeatedly focused on since taking charge in December 2018.

The club’s identity is at the heart of the design, with the crest influencing how the shirt looks and feels.

“For this season, we looked to create something that connects people and stands for unity,” said Inigo Turner, Design Director at adidas. “We pretty quickly landed on the crest as it is the representation of the heart and passion of the club, it is symbolic and iconic across the world.”

The shirt features a unique pattern, achieved through a special dying technique to “add depth”, according to the official adidas release statement. The kit is completed by white shorts and black socks.

The kit will make its official debut tomorrow (August 5) as Manchester United resume their UEFA Europa League campaign at home in their last 16 second leg tie against LASK. The Red Devils are 5-0 up after the first leg in Austria.