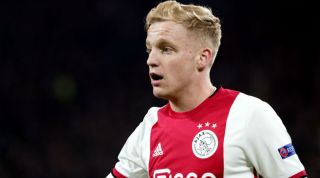 Ajax were thought to have a deal in place with Real Madrid last summer but the move was put on hold due to a lack of player sales.

Los Blancos failed to shift the likes of James Rodriguez and Gareth Bale last summer and thus prevented them from signing further players.

Rodriguez and Bale currently take up big chunks of Madrid's wage bill and the club are believed to be working on their exits.

According to Marca, Manchester United are now hoping to take Van de Beek from under Real Madrid's noses.

After the success January signing Bruno Fernandes has had at Old Trafford, the club are reportedly hoping to take some weight off his shoulders.

It's understood that Van de Beek's ability to join attacks and almost act as a second striker will provide Fernandes more freedom to operate.

Van de Beek, who turns 23 in April, has scored 10 goals and assisted a further 11 so far this season - continuing his fine form from the previous campaign.

He played a pivotal role in Ajax's famous double-winning season and their run to the semi-finals of the Champion's League.

The Red Devils are aware that a move for Van de Beek would likely only happen if Real Madrid pass up on their agreement with the Dutch champions.

Though, United are said to be keen to lay the groundwork for any potential deal in case they get the green light.

Ranked! Every Premier League manager by their CURRENT playing ability