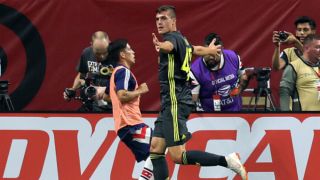 Juventus defeated the MLS All-Stars 5-3 on penalties in Atlanta amid a blockbuster transfer with Italian rivals AC Milan.

Juve pair Gonzalo Higuain and Mattia Caldara were poised to join Milan on Wednesday, with veteran defender Leonardo Bonucci nearing a sensational return to the Serie A champions.

And on the pitch in front of a record-breaking crowd of 72,317 at Mercedes-Benz Stadium, Juve triumphed midweek after Bradley Wright-Phillips was the only player to miss a penalty in the shoot-out midweek following a 1-1 draw.

Italian striker Andrea Favilli put Juventus ahead after 21 minutes as the 21-year-old took his pre-season tally to three goals.

Congratulations to on winning the Game by . What a night in Atlanta.Juventus: MLS All-Stars: - August 2, 2018

Signed from Ascoli but expected to be sent out on loan, Favilli – whose first-half brace inspired victory over Bayern Munich at the International Champions Cup on July 25 – rose highest and glanced a header into the far corner of the net from Matheus Pereira's cross.

But the All-Stars hit back five minutes later when Venezuela star and former Torino forward Josef Martinez – with 24 MLS goals and nine more than nearest rival Zlatan Ibrahimovic – produced a poachers finish to restore parity after a goalmouth scramble.

It was an evenly-contested opening in Atlanta, where Favilli's glancing header and Bernardeschi's long-range effort highlighted the All-Stars' impressive performance.

However, Juve struck first in the 21st minute as Favilli continued his fine pre-season form for the Italian giants – the powerful striker meeting Pereira's cross and guiding his header past Brad Guzan and into the far corner.

Martinez headed Miguel Almiron's delivery into the path of Vela, who forced Wojciech Szczesny into a save but the Poland international failed to push the ball over the crossbar as Ignacio Piatti sent the rebound cross goal where the former was the quickest to react.

Giovinco came off the bench amid a flurry of changes before the break as per club requests and the Italian star almost helped put the MLS XI ahead in the 39th minute after he picked out Ezequiel Barco but Szczesny was up to the task.

Both teams cleared their benches in the second half and it impacted the rhythm of the match with chances few and far between.

Diego Valeri had the chance to win the game in the final nine minutes but the scrambling Mehdi Benatia managed to block the goal-bound strike.