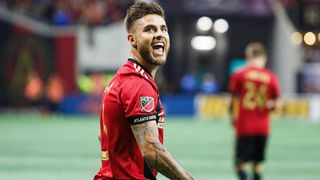 Atlanta United closed in on the MLS Supporters' Shield with another win, while the New York Red Bulls stayed in touch on Saturday.

Goals from Julian Gressel and Hector Villalba helped Atlanta to a 2-0 victory over Real Salt Lake.

Coming off a thrilling comeback win over the San Jose Earthquakes, Atlanta struck eight minutes before half-time against Real Salt Lake, Gressel making it 1-0 with a tremendous volley.

Gressel helped set up Villalba's sealer with half an hour remaining, his throw-in put away by the attacker, although the strike hit the post and went in off Nick Rimando.

It took until the final 20 minutes for the hosts to claim their win, Alejandro Romero's scrappy opener followed up by Derrick Etienne's sealer.

In the Western Conference, Los Angeles FC closed to within a point of leaders Sporting Kansas City.

Walker Zimmerman scored a brace to lead LA to a 2-0 win over the Earthquakes on Saturday.

Montreal Impact are hanging onto a play-off spot after holding New York City to a 1-1 draw, the Columbus Crew edged the Colorado Rapids 2-1 and Minnesota United upset the Portland Timbers 3-2.

Elsewhere, the New England Revolution came from behind twice to draw 2-2 against Chicago Fire and Orlando City and the Houston Dynamo drew 0-0.