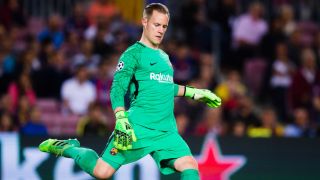 Lucas Digne believes Barcelona team-mate Marc-Andre ter Stegen is the best goalkeeper in the world following his exploits against Juventus in the Champions League.

"For me, Ter Stegen is the best goalkeeper in the world right now," Digne told reporters.

"He is playing at an extremely high level."

Despite the draw away to the Italian champions, it was enough for LaLiga-leading Barca to advance to the knockout round with one matchday remaining.

Barca are three points clear of Juve in Group D as Ernesto Valverde's men round out their group campaign against Sporting CP.

"We continue to work hard and are happy to be here," Digne said. "We want to continue to play without losing."