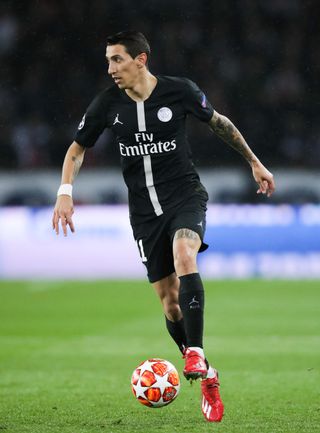 Paris St Germain bounced back from their Champions League exit against Manchester United with a convincing 4-0 win at struggling Dijon to tighten their grip on the Ligue 1 title.

Brazil defender Marquinhos headed PSG into an early lead from a corner and Kylian Mbappe made it 2-0 just before half-time.

Angel Di Maria curled in a free-kick five minutes after the restart, with substitute Eric Maxim Choupo-Moting adding a fourth during stoppage time.

The victory saw PSG restore their 17-point lead over second-placed Lille – with a match in hand – as Thomas Tuchel’s side laid down a marker ahead of Le Classique clash against Marseille on Sunday.

PSG had broken the deadlock following a corner in the seventh minute when Marquinhos’ flicked header at the near post dropped into the net.

Mbappe had a chance to make it 2-0 in the 18th minute, but his effort was saved by Runar Alex Runarsson.

The French World Cup winner, though, did put the ball in from close range in the 40th minute from a cross by Layvin Kurzawa after Di Maria had surged forward.

Any hopes of an unlikely comeback by the relegation-threatened hosts were ended five minutes into the second half when Di Maria curled a 20-yard free-kick over the wall and in off the far post.

Mbappe saw a late effort flash over before then hitting the post from close-range.