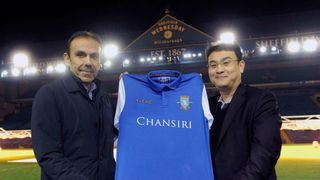 New Sheffield Wednesday boss Jos Luhukay says the prospect of managing in the Premier League is what tempted him to take over the out-of-form Championship club.

The Dutchman was the surprise choice to replace Carlos Carvalhal, who was sacked after two-and-a-half years at Hillsborough last month following a poor run of form.

Wednesday made the play-offs in the past two seasons, and were beaten finalists against Hull City in 2016, but Luhukay takes over a side that are 16th in the table and just six points off the drop zone, and 13 off the top six.

However, Luhukay is harbouring big ambitions at his new club.

"England as a championship, the Premier League is, I think, for every manager there is a high motivation to work here," he told Omnisport.

"It's a big challenge, this is why I came here."

The 54-year-old has never coached in England, but has enjoyed plenty of success in Germany, earning promotions to the Bundesliga with Borussia Monchengladbach, Augsburg and Hertha Berlin - racking up a record points tally for Germany's second tier with the latter.

And Luhukay hopes to take Wednesday on a similarly upward trajectory.

"Of course, I want success for the club, for the fans and for my players," he added.

"We must have hard and intensive work to be successful in the future. I hope we can do it together."

Luhukay could hardly have picked a bigger game to start his tenure with Wednesday making the short trip to Bramall Lane on Friday to face fierce rivals Sheffield United.

"For every manager [it is exciting]," he said. "But also for the players and for the fans derbies are highlight days, you must give all that you have.

"The first game is a derby and if you win, for the players, for the team, it's fantastic."

But Luhukay is keen to take things a game at a time, saying: "We must only look to Friday and focus on Friday.

"We must look to Friday and to win the derby, the rest comes from game to game and that's what we must do now."