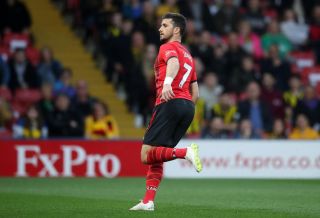 Shane Long had no idea he had scored the fastest goal in Premier League history in Southampton’s 1-1 draw at Watford.

The 32-year-old Republic of Ireland striker fired the Saints ahead after just 7.69 seconds at Vicarage Road.

It was not enough to secure Ralph Hasenhuttl’s side all three points in their bid to stave off relegation as Andre Gray equalised for Watford in the final minute.

“It’s nice,” Long told Saints’ official website. “I didn’t find out until after the game and I didn’t know what the record was before.”

Long’s effort was a fraction more than two seconds quicker than the Premier League’s previous fastest, scored by Tottenham’s Ledley King after 9.82 seconds against Bradford in December 2000.

The goal came from Watford’s kick-off. Roberto Pereyra played the ball from the centre-circle back to defender Craig Cathcart some 40 yards from his own goal.

As Cathcart attempted to launch the ball up field, Long charged it down and raced through before lifting it over Hornets goalkeeper Ben Foster.

“In every game you want to show your intent from the first kick and put them under pressure.

“Mainly it’s just to force that long ball so they’re not quite set. Luckily I blocked it, it dropped nicely and I took a touch across Craig.

“I know Ben from West Brom and he’s an amazing keeper. He spreads himself so well and from watching clips I knew the dinked finish was my best option of scoring. Thankfully it came off.

“Records like that are nice to have I suppose, but it’s just disappointing that it wasn’t a goal to get three points because I thought we deserved it.

“Everybody put in such a shift all over the park. We had a few chances to get a second goal – I missed a couple, Redders (Nathan Redmond) hit the post twice, Bertie (Ryan Bertrand) hit the post as well. If one of those goes in, it gives us breathing space and we can see out the game.

“But Watford are a good side – they are where they are in the league for a reason, so fair play to them for coming back.”