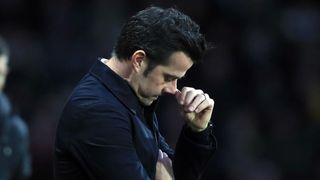 Marco Silva pledged to seek answers from referee Lee Probert after Everton defender Kurt Zouma was sent off after full-time of the 1-0 loss at Watford.

The Everton players fumed as Andre Gray's 65th-minute goal proved decisive, insisting the corner that led to it should not have been awarded.

Zouma continued to voice his disquiet following the conclusion at Vicarage Road and was shown two yellow cards.

"I will try and speak with the referee now, if he stays here, because I spoke with Kurt at the end of the match," Silva told a post-match news conference after Everton's eighth defeat in 11 Premier League matches was lapped up by fans of his former club Watford.

"He told me he received a yellow card and then the referee gave the second yellow card to him.

"It is the moment for our players to be calm but sometimes that is not easy and the referee has to understand because many, many mistakes are coming against our team.

"It is not easy sometimes to understand everything and they cannot understand the referee and his assistant.

"It is not a case for Kurt to do something at the end of the match because the game is finished.

Lucas Digne hit the top of the crossbar with a free-kick as Everton pushed for an equaliser and substitute Dominic Calvert-Lewin spurned a clear opportunity on the end of a Zouma cross, but Watford held on.

"It was a very demanding game, we knew that before the game," Hornets boss Javi Gracia told BBC Match of the Day, identifying Gray's introduction from the bench as key.

"It was a very equal game in the first half. In the second half we changed the shape, we had two strikers and played better, a little bit more directly – winning second balls. After that we managed the game."