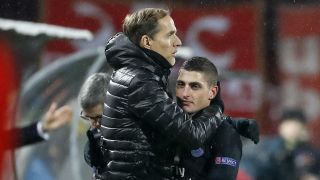 Thomas Tuchel had mixed emotions as Paris Saint-Germain's record-equalling victory over Guingamp was dampened by a "serious" injury to Marco Verratti.

PSG ran out 9-0 winners on Saturday - matching their all-time biggest Ligue 1 win - but midfielder Verratti hobbled off early in the match with an apparent blow to his left ankle and, Tuchel confirmed, departed to hospital for tests.

The absence of Adrien Rabiot, who is the subject of interest from Barcelona, had already depleted Tuchel's options in the middle of the pitch and PSG could now be without Verratti for the Champions League clash with Manchester United, with the first leg taking place on February 12.

And the PSG boss acknowledged that this latest issue was a setback the side could not afford.

"I have no news, but that's not good news. I think it's serious. It's the worst thing that could happen to us," Tuchel told Canal +.

He added to beIN SPORTS: "I am happy and sad. Happy because we won 9-0 with a good spirit and with a lot of quality. We had a lot of chances, we played with structure. We controlled the counter-attacks and I am very happy for that.

"But I am sad for Marco Verratti. It's possible that he will be out for a few weeks."