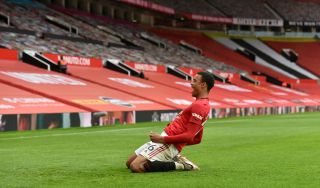 Mason Greenwood enhanced his growing reputation with two more goals at the weekend as Manchester United brushed aside Bournemouth at Old Trafford.

The 18-year-old only made his debut last season and has taken the Premier League by storm in his first full campaign for the senior team, scoring eight of his 16 goals this term in the top-flight.

What has his form been like since the restart?

Greenwood has featured in all five of United’s matches since football resumed, scoring three goals in the three games he has started. He earned rave reviews from pundits analysing his performance but no higher praise came from his manager Ole Gunnar Solskjaer, who said Greenwood is “one of the best – if not the best – finisher I have worked with and seen.” Asked if he had known a young player with such power and precision, Solskjaer replied: “No, I don’t think I have.”

So what makes Greenwood so good?

One of his best attributes is he is two-footed – to the point where it is difficult to tell which side is actually his strongest. That, combined with his pace, must be a nightmare for defenders. Greenwood has unerring instinct and composure in front of goal and his positioning and runs are excellent. He returned from lockdown noticeably bigger and growing into his frame has made him stronger on the ball.

So where does he rank historically compared to other young players?

Only three players have scored more Premier League goals than Greenwood at his age. Michael Owen, who features on the list twice, is well out in front with 18 but Greenwood could realistically move up to second place this season with three more goals – overtaking United’s all-time leading scorer Wayne Rooney. In December, Greenwood, at 18 years and 72 days, became the youngest United player to score twice in Europe as Solskjaer’s side beat AZ Alkmaar 4-0 in the Europa League.

What lies ahead for the young striker?

Eyebrows were raised when Solskjaer sanctioned the departures of Alexis Sanchez and Romelu Lukaku in the summer and, rather than bringing in a big-money replacement, put his faith in Greenwood. But that decision appears to be vindicated, with Greenwood having already scored more goals than Sanchez did during his time at Old Trafford. The full value may not be seen this season but Greenwood is returning his manager’s faith in him and if he continues to work hard and take his opportunities the sky is the limit for him.