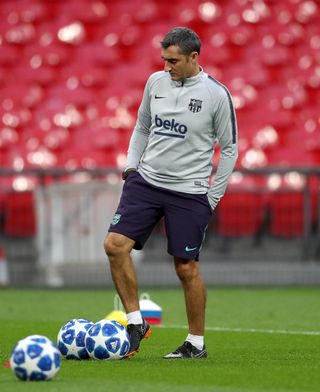 Barcelona coach Ernesto Valderde does not expect Atletico Madrid to hand the title to them by losing to Valencia on Wednesday.

A 2-0 win over Alaves, courtesy of second-half goals from Carles Alena and Luis Suarez, means the Catalans are just one victory away from retaining their LaLiga title.

However, should second-placed Atletico lose to visitors Valencia, in fifth and pushing for a Champions League place, then the championship will be Barca’s with four matches to spare.

“Atletico is a competitor that shows every day how they do it. We’ll see. I do not see Atletico relaxing,” said Valverde.

“We count on that we will need the three points (at home to Levante).

“We are at the peak of the season and the victory (over Alaves) is worth its weight in gold.

“There have been changes and the team has been good, we have achieved three points that put us very close to the title.

“We’ve been fighting for that for many months. We are nearing the end. It’s a great joy to be in this situation.”

Valverde sent on Lionel Messi for the final half-hour almost as soon as Suarez had doubled the lead from the penalty spot.

The Argentina international had been rested, along with full-back Jordi Alba, but the Barca boss was not tempted to keep him benched for the full 90 minutes.

Barcelona host Levante in a potential title clincher on Saturday before they welcome Liverpool in the first leg of the Champions League semi-final four days later.

“The idea was to play because the result was not clear,” Valverde added at a press conference.

“Leo has many individual challenges ahead but today it was convenient to rest but it is better to keep the players active than to put them in an urn.”

Goalscorer Alena hopes Atletico do keep the title alive so Barca can celebrate clinching the title in front of their own fans.

“I’d prefer to win it on Saturday at home and celebrate it with our supporters, although if we win it before then it will be welcome,” he said, according to Marca.

“We deserve this league title, we’ve been the best.”

Alaves have gone six games without a victory, which has put a big dent in their European hopes.

Coach Abelardo Fernandez said, according to the club’s Twitter feed: “I will continue fighting as I have done every day since I came to Deportivo Alaves in December 2017.”