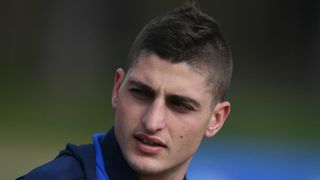 Donato Di Campli said it would be complicated for Marco Verratti to leave Paris Saint-Germain amid growing links to Barcelona, while the agent ruled out a Serie A comeback.

Verratti was linked with a move away from PSG throughout the 2016-17 campaign and those reports have intensified after the French capital club were dethroned by Monaco in Ligue 1.

Di Campli said he has spoken to PSG about their future plans as LaLiga giants Barca reportedly pursue the 24-year-old Italy international midfielder, who is contracted until 2021.

"It's very complicated [to leave], but we have expressed our ideas to PSG. We're not talking about Barcelona or other clubs, it's about projects," Di Campli told Sky Italia.

"I think I represent a champion and clearly I have questions. To be a champion you have to win.

"If PSG don't want to sell him, despite offers from all over Europe, then we'd have to examine our consciences in Italy."

Former Pescara star Verratti has also been linked with Italian champions Juventus and AC Milan but Di Campli poured cold water on rumours of a move to Serie A.

"It's difficult," he added. "I think it's a deal which is still out of the scope of Italian clubs."