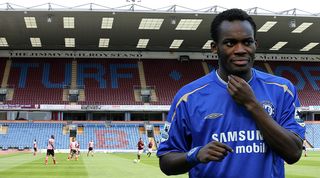 “We went away from Anfield thinking the deal was done,” says the Danish legend who, as a 19-year-old Brondby sensation, agreed a three-year deal with the English champions. “But two weeks later they came back saying they wanted to offer the same package but for four years, because I needed time to develop. I was disappointed, so I decided not to join.” The Dane went to Juventus instead, and later played for both Barcelona and Real Madrid.

John Gregory’s Villans were sitting second in the Premier League in January 1999, and looked set to bolster their title tilt by signing Juninho from Atletico Madrid. A £12 million fee was agreed for the Brazilian, but then Atletico’s barnmpot-in-chief Jesus Gil was hospitalised. The other club officials were reluctant to do business without their president’s say-so (he did, after all, sack 15 managers in three seasons and once declared his players “don’t deserve to live”), and the deal evaporated. He re-joined Middlesbrough three years later.

Not Gerd, not Thomas, but Luis Antonio Correa da Costa. The Brazilian agreed to join the Toffees after helping the Seleção win the 1994 World Cup. Boss Mike Walker even called a press conference, but Muller walked out on the club 30 minutes before being unveiled after discovering the horrendous news that he was going to get taxed on his £20,000 weekly wage and wouldn’t receive a free house and car. The poor lamb joined Kashiwa Reysol in Japan instead. He’s now a pastor.

He's widely regarded as the best player in Real Madrid's history, but the legendary striker could have signed for rivals Barcelona. When the Argentine first opted for a move to Spain, the Catalan club were the first to show interest; Di Stefano played in a 1953 pre-season friendly for them. What Barça didn’t realise was that he was registered for two clubs, and so they ended negotiations with Millonarios. Madrid stepped in and snapped up the free-scoring hitman, who went on to win five consecutive European Cups and eight Spanish titles.

Real Madrid’s all-time leading goalscorer could have been banging them in at White Hart Lane had it not been for Juande Ramos’s sacking in 2008. “I had a meal with my agent and Ramos to tell me about Tottenham and the Premier League,” said the forward. But with a deal on the table, the Spurs board decided to bring in Harry Redknapp, and Ramos ended up keeping Raul at Real instead.

Alex Ferguson remembers speaking to Gazza the night before going on holiday at the end of the 1987/88 season. “He said ‘Go and enjoy yourself Mr Ferguson, I’ll be signing for Manchester United'. So I went on my holidays, but then the chairman rang and said he’d signed for Tottenham. They bought a house for his mother and father in the north-east and that swung it.” One of the great what-ifs of British football.

The three-time Ballon d’Or winner had talks with Scottish side Dumbarton at the age of 33. Cruyff, a champion of Total Football in the 1970s and widely regarded as one of the best players of all time, admitted he was “tempted” – just not quite enough. Dumbarton's chairman and manager flew to Amsterdam to hold talks with the Dutchman but ultimately failed to land his signature. “I thought I was too old at that stage to go to Scotland, where you know the weather will be difficult,” sighed Cruyff, who joined the Washington Diplomats instead.

Club policy resulted in the Ghanaian powerhouse not signing for Burnley as a 17-year-old. Essien had been on trial at Turf Moor after impressing in the Under-17 World Cup, but the Lancashire club decided not to sign him after refusing to budge on their policy of paying more than 60 quid a week for an apprentice. At least they had Micky Mellon.

If only, eh? Manager Trevor Francis brought the maverick Frenchman over from Nimes for a trial, where he impressed in an indoor friendly match. Francis wanted Cantona striker to stay for another week so he could judge him on grass, but the moody star refused and moved to Leeds instead. One league title and legendary move to Manchester United later, and a King was born.

The inspirational Blackpool captain came within two minutes of joining Spurs during the final day of the January 2011 transfer window. The Scot was foiled by the fact that one member of the Blackpool board forgot to turn on his newfangled mobile phone, leaving him out of touch on the most important deal-making day of the year. The necessary signatures therefore weren’t ready until 11.02pm. “It was impossible to get done,” fumed Redknapp.