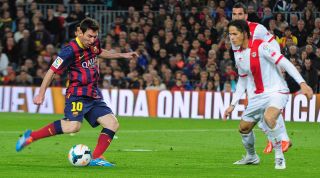 Life is forever bad for Betis

Boos and jeers greeted Betis players at training on Monday, after Sunday's 1-0 defeat to Granada left the bottom-feeders on 14 points and with just one victory in 17. “While we're not in the second division, we're going to give everything in every game,” said a defiant Betis boss Gabriel Calderón, fooling no one; least the team’s irate supporters.

Poor Anaitz Arbilla. Getting skinned one too many times against Real Madrid ended in him being substituted - an action from coach Paco Jémez that left the full-back blubbing - the defender suffered the same treatment after 42 minutes in the 6-0 defeat to Barcelona. “It was a tactical change, like many that take place,” explained Jémez.

Worse than Betis, apparently. That is the accolade for Getafe, now nine games without a win having picked up just two points since the start of the New Year. The defeat to Real Madrid leaves Luis García in a precarious position, with the Getafe boss admitting: “we have run out of lives, like a computer game. We can’t lose any more.”

Levante are the new Levante

Levante remain obdurate, solid, hard-working and unglamorous - but extremely effective. The Valencia club are on a special run of Levante form at the moment, with the weekend’s 1-0 victory against Almería leaving them six matches unbeaten and with clean sheets from their past four games. “Nobody is going to relax here,” promised a non-relaxing Joaquín Caparrós, who is looking for 10 more points to reach the magical 42 mark in La Liga.

Villarreal may have broken even Spain's bad behaviour limit

Well, it certainly tops lobbing a cigarette lighter at Cristiano Ronaldo. La Liga's misbehaviour in the stands moved up several gears over the weekend, with Villarreal's game against Celta marred by naughtiness in the final stages and causing a suspension of around 20 minutes.

What was originally thought to be a smoke bomb turned out to be something considerably more dangerous: a tear gas canister, resulting in the evacuation of both pitch and stands with Villarreal 1-0 down at the time.  “An awful experience,” said an angry Villarreal boss Marcelino, after his side eventually lost 2-0. The three questions that are being asked after the event are how a canister was brought into the ground, how someone got their hands on hardware reportedly of military origin, and what action will be taken against Villarreal.

Atlético Madrid got away with a €600 fine for the lighter incident, but the sanctions against Villarreal could be considerably heftier. “The problem is that Villarreal failed in their security,” said league president Javier Tebas, in what could be a sign of some strong action against the east-coast club.

Athletic Bilbao can be out-Athletic’d

You have to love Espanyol. They have the ability to irritate the pants out of the better clubs in La Liga, like a particularly exuberant puppy. The Pericos have given a game to Barcelona, Real Madrid and Atlético, and this time it was fourth-placed Athletic's turn. The visitors' performance - all physicality and set-piece threat - was equally annoying to their Basque hosts. Goals from Sergio García and Diego Colotto meant a first league defeat for Athletic in the new San Mamés.

More frustration in the Sánchez Pizjuán

Both Sevilla and Valencia must have given up the Champions League ghost some time ago, but the has-been pair will still be harbouring hopes of a Europa League finish, at least. The downtrodden duo will need to buck their ideas up a little, though, after a goalless draw in Seville on Sunday left them both off the pace and Sevilla without a league win in six.

One more match. That’s potentially all Jesé has left in the Real Madrid starting line-up, with Cristiano Ronaldo’s league suspension set to run out next weekend against Elche. The young forward has been making hay in Ronaldo’s absence, though, netting his third league goal in a row against Getafe. The last Spaniard to achieve that for Real Madrid was Raúl in the 2008/09 campaign.

SEE ALSO Everything you need to know about... Jesé

Sometimes top teams in La Liga need a thorough shake-down over the weekend to prepare for a more rigorous examination in the Champions League. Real Madrid and Barcelona often fall into that category, but this was not the case for Atlético Madrid. This team needed a genteel stroll in the park to restore some energy and morale after three consecutive defeats.

And that’s what they got in a 3-0 victory against Valladolid, with their first two goals scored within four minutes of the start. “It’s the same as ever,” claimed Diego Simeone after the game, “we are going match-by-match, minute-by-minute.” So far it's a tactic that is working: Atlético are still running with the bulls at the top of the table on 60 points, seven more than they had at the same point last season.

We still have no clue of Barcelona's quality

Once again, we arrive at a big Champions League clash without knowing if the Catalan club will win by 10 goals and play their opponents off the park, or if a Bayern Munich-style cruising-for-a-bruising is on the cards for Tata Martino’s men.

Saturday’s 6-0 victory over Rayo was all too predictable against opposition who promised to take the game to Barcelona. Inevitably, they got battered in the process, lasting just over a minute before conceding a goal. “We could have lost 3-0 or 9-0,” noted Rayo boss Paco Jémez, when asked whether a more defensive approach may have been wiser in the Camp Nou.