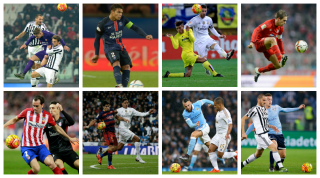 Here are the best 11 defenders in the world, as decided by FFT and our trusty band of contributors from around the globe. Agree with our list? If not, tell us in the comments below or on Twitter or Facebook.

Otamendi has had a superb 2015 for both club and country. His perfomances with Valencia earned him a pace in the La Liga Team of the Season, before the Argentine repeated the feat at the Copa America as Argentina lost in the final. A big-money move and some quietly impressive performances for Manchester City have since capped off a wonderful 12 months.

By winning his fourth major European league title in five years with PSG, Thiago Silva has well domenstrated his credentials for appearing on this list. And although he suffered Copa America disappointment, the Brazilian still showed enough in the Champions League last season to warrant a placing here.

Boateng remains the constant no matter how much Pep Guardiola dallies with other formations. More often than not, the German is the sole out-and-out defensive shield used by Bayern. And likewise with world champions Germany.

Last June, Pique won his third Champions League medal with Barcelona, an astonishing measure of his ability as a defender – especially given that he often plays alongside others who aren't natural defenders. Oh how Manchester United must wish they could have retained his services...

The very fact that Ramos has been made los Blancos captain tells you about his worth to the team. In 2013 he became the youngest player to ever reach 100 international caps, making his value for country equally high.

If Ramos provides the grunt, then central defensive partner Varane brings style to the table whenever Real Madrid take to the field. The Frenchman played more matches for his club at the heart of the defence than the aforementioned Ramos or Pepe in the last 12 months, proving his value to the side.

Chiellini is such a good defender that it is reasonable to ask whether, had he played in the 2015 Champions League Final – he missed out through injury – if the result may have been different. Don't forget that the Italian was integral to Juve's dismissal of defending champions Real Madrid in the previous round, and has since scored some crucial goals at international level.

Is Alaba really a defender? He's good enough to play in defence or midfield, having often been fielded at centre-back by Bayern Munich boss Guardiola, but is shunted forward for his country Austria who charged towards Euro 2016 unbeaten.

Godin is our best centre-back in the world. He remains a colossus upon which Atletico Madrid's defence stands, having helped los Rojiblancos split the league challenge of Spain's traditional big two. This season they're theatening to do it again.

Lahm may have retired from international football but he remains one of the first names on Pep's teamsheet, more often at right-back than on midfield over the last 12 months. "The most intelligent footballer I've ever coached," Guardiola once said of the German.