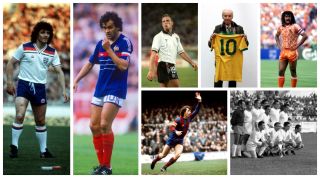 Pass any high street sport store theses days and you're bombarded with the sight of football shirts of all colours and design. Premier League kits, tops from La Liga, Serie A, the Bundesliga, even MLS. The five-a-side top of your dreams is just a click away. That wasn't always the case. In the '60s, '70s and '80s, new football shirts were treated with reverence. Clubs didn't change their designs every five minutes and shirt sponsors, squad numbers and limited edition cup kits were fairly unheard of. So what, then, are the best kits of all time? We've argued for many hours (and thanks to Neal Heard for the accompanying research) to come up with this definitive selection.

A masterpiece of design made all the more sexy by the football specialists that wore it, not to mention that oh-so-risque Kappa logo of two people sitting starkers, back to back. Juve's kit, complete with its futuristic Ariston logo, seemed beamed from the future. Twinned with ultra stylish shorts and, in Michel Platini's case, Patrick boots with laces tied around his ankles, this was a playground object of desire across the country.

Spurs were considered fairly otherworldly during the late '70s mainly because they signed a couple of "foreign lads" in Argentines Ossie Ardiles and Ricky Villa. Luckily, they had clobber to match their launch from Second Division no-marks to European cup kings through an Admiral shirt armed with 'Concorde' collars that almost brushed the nipples, plus some nifty branding on the sleeves. This was Spurs' last kit without a sponsor. Next up: a decade of cheap beer logos and Chas 'n' Dave singsongs.

There were plenty of style highlights from Mexico '86: the grainy images of Brazilian right-back Josimar smashing one in from what seemed like 50 yards out, for example. The less-is-more aesthetics of the Puma King and Adidas Mondial football boots. Gary Lineker's plaster-cast celebration. One kit stood out among them all, however: Hummel's mind-bending red and white Denmark top, worn by the likes of Jesper Olsen, Michael Laudrup and Morton Olsen. As they surged past their opponents in the group stages like an unstoppable, pinstriped rip tide, their blurred lines caused some sceptics to brand its colour scheme as 'girly pink'. Football's hipsters knew the deal, though. As did Tottenham Hotspur, Coventry City and Aston Villa who would go on to adopt Hummel as their kit manufacturer in the following seasons.

This, predicted Jimmy Greaves in 1979, was 'The Team Of The '80s'. A side managed by Terry Venables, and seemingly primed to usher in a new era of dominance outside of Liverpool's stranglehold on domestic and European competition. In reality, it was the 'Team Of Autumn, 1979' and their charge was barely a stumble out of the blocks, but, bloody hell, didn't Crystal Palace look cool in that blue and red sash? It also helped that their kits were being designed by Admiral and Adidas, the cut of choice for the five-a-side connoisseur.

It's almost impossible to wax lyrical about the Brazilian kit without hearing the voice of Paul Whitehouse's Ron Manager jabbering away in your earhole. But the yellow, blue and white mash-up, with green thrown in, has been a park land symbol for decades. Pick your favourite: 1970, 1982, the 1998 version accompanied by a jaw-dropping ad campaign that framed the entire squad booting their ball around an airport. It's a style classic.

In 1970 they were world champions, playing in the unforgiving heat of Mexico, yet there was something reassuringly ice cool about England's all-white football kit. The lack of colour or manufacturer's logo gave it an almost gentlemanly purity; the red numbers on the back (note all future England kit designers: red. Always red) added a dash of regal panache. Equally, the Umbro Italy 1990 top remains much loved, synonymous as it is with Gazza's tears, the loss on penalties and semi-final heartbreak. The away versions in red and blue also hold a special place for many fans, too, while the white England Admiral kit, as worn by Kevin Keegan & Co. at Euro 1980 and the 1982 World Cup, also warrants merit.

When England dispatched Peru 3-0 in 2014 before heading off to Brazil for a summer of misery and doom, the overwhelming vibe wasn't one of 'Well, Roy's Boys might come out of this with a bit of dignity'. No, the topic on most people's lips was: 'How bloody cool was that Peru kit?'

On the face of it, their strip covered the Sunday League basics: red shirts, red socks and red shorts. But the devil was in the detail. The slightly darker sash wrapped around the chest, the gold Umbro logo and a team badge seemingly designed in the back room of some South American social club. An understated blend of sartorial quality. Some may hark back to the classic Peru kit of 1978 but, for us, this tops it.

A close second to Denmark's super slick design in Mexico '86, France's Adidas kit carried a more stripped back approach: a blue shirt with red and white bands on the shoulders, red socks and white shorts.

It was made all the more iconic by the fact that the designer's three stripe trademark trim on the arms and thighs delivered a distinctive and streamlined edge. The white away kit was smoking, too. The only problem was those shorts: they were just too short. Some may prefer the blue-collared shirt of Platini's Euro 1984-conquering side, but the cleaner design of its successor comes out on top here.

There's something stout and stoic about the yellow and red shirt, as worn by football's most heroic fictional character, Roy Race. The club never traded in flash-in-pan modernity such as zip-up collars or fancy bands across the sleeves, although a quick look online throws up one or two abominations. Still, there's a familiar look to the kit worn by Race as he played out his 865 seasons, winning 432 league titles, 78 European Cups and surviving approximately 22 helicopter crashes. It was football fantasy, literally. While wearing a Nike kit in the mid-80s, Race was shouldered by the Kemp brothers from Spandau Ballet as chairman Geoff Boycott watched from the stands. It could only happen at Melchester. Or maybe West Ham.

What's your favourite Barcelona team? The all-conquering tippy tappy, ball-hogging incarnation of recent memory? Or sides featuring Diego Maradona, Rivaldo, and er, Mark Hughes? Either way, despite the perennial spring cleaning of staff that takes place at the club, there is at least one constant: that cracking red and blue strip. Of course, the away kit has presented plenty of nominations for the worst kit of all time - mouthwash green, chinese takeaway vomit peach - but for a stonewall classic, it's hard to beat the stripes of Barca. And woe betide any Sunday League team brave enough to wear those colours. You're going home beaten and black-eyed. Unless, of course, you're really good.

The kit adorned by the likes of the 1988 European Championship side, featuring Ruud Gullit and Marco van Basten where he scored that goal, is another Adidas shirt, using fading-out triangles set against the traditional orange of the Netherlands. It was soon replaced, however, and is now tough to track down on classic football shirt and auction sites.

The shirt of the Albiceleste as they won the big one for the second time at Mexico '86. A classic design and round neck capture the spirit of their Peter Shilton-rounding captain Diego Maradona and his triumphant fellow countrymen.

The 'squashed banana' kit of the Gunners from the early '90s has gone from being regarded as a garish abomination to being considered quite cult with some fans. A memorably distinctive design aids its cause.