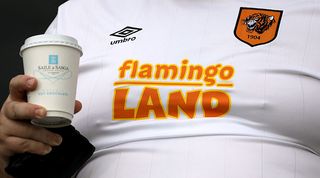 Scottish Premiership side Hamilton will play their games at the HopeCBD Stadium next season after pocketing a five-figure sponsorship sum. It's caused some debate as the business, which is based at the ground, sells products containing cannabidiol (produced from cannabis plants).

Far out, man! But at least the Accies have a more standard shirt sponsor: Euro Mechanical Handling, who we're all absolutely familiar with. Yet, over the years, clubs have accepted cash from some bizarre places in return for a space on the shirt. These are some prime examples.

When Scottish post-rock band Mogwai released their album Young Team in 1997, they probably never imagined they’d be sponsoring a real one 20 years later. Rather than the local gangs that their debut record refers to, Saint Roch’s Primary is a school in Mogwai’s hometown of Glasgow for kids who are deaf or hard of hearing – which is quite fitting considering how loud the band’s gigs are.

Flowery Field might sound like a garden centre, and in a way it is, but it’s one that specialises in a very particular type of plant. Sponsors of Toni Polster’s Wiener Viktoria, Flowery Field is a specialist cannabis grower.

There’s no suggestion that the team from Austria’s fourth tier have been testing out the company’s merchandise, but they did lose 24-0 to Wienerberg back in May last year, so you can make your own mind up on that one.

Surfing the zeitgeist like Big Sam on a granite bodyboard, Everton took the opportunity to slap the name of 2010’s most popular smartphone game on the sleeve of their 2017 shirt.

Word is that the Toffees also get pumped up for each game by listening to F**k You by Cee-Lo Green and unwind afterwards in front of an episode of Lee Nelson’s Well Good Show. Some of the team have also signed up to something called Facebook.

As sponsors go, Flamingo Land isn’t the strangest. It’s a local attraction for Hullensians, and besides: who doesn’t enjoy a day at the zoo? No, FourFourTwo’s main problem with it is that there are far more than just flamingos at Flamingo Land, so it’s like calling a supermarket Broccoli World.

Of course, it could’ve been worse for Hull fans. Given club owner Assem Allam’s track record, they could’ve seen shirts turned pink and players forced to play every game standing on one leg.

Booze sponsors used to be everywhere in football, but for better or worse (it’s definitely worse) they’ve been gradually replaced by betting companies.

Back in 1973, shirt sponsorship wasn’t even allowed in Germany, so Eintracht Braunschweig changed the club logo to that of everyone’s favourite Red Bull accompaniment and stuck that on the front of their kits instead. It’s almost as if that gave Austria’s premier purveyor of extreme sports and fizzy cough medicine an idea...

Some shirt sponsors just work. Pirelli and Inter; Quilmes and Boca Juniors; or Newcastle and Brown Ale, to name just a few. Portsmouth’s two-year tie-up with Ty, however, was not one of them.

As worn by players such as Tim Sherwood, Amdy Faye and Deon Burton, Ty is an American company most famous for making Beanie Baby soft toys that did nothing but inexplicably change hands for large amounts of money. Ah, hang on. It all makes sense now.

Let’s not get into the colossal mismatch that exists between fast food and professional football, and focus instead on the horrendous way BK managed to spread the image of their creepy mascot in the late noughties.

The ‘Burger King’ had his rubbery face printed on the inside of Getafe’s 2009/10 shirt, so when a player pulled it over his head in a Ravanelli-style celebration, the monarch of meat’s mug would be displayed for all to see. And it seemed to work: the Azulones scored 58 goals that season and finished sixth in La Liga.

Sheffield United may have had Visit Malta on their shirts in 2009, but it wasn’t long ago that a whole country sponsoring a football team seemed strange.

Back in the halcyon days of 2014, Qatar’s propulsion of PSG towards becoming a footballing superpower was still work in progress, so Atleti’s slightly confrontational ‘LAND OF FIRE’ shirts seemed all the more unusual. In fairness, though, they looked even weirder on Sheffield Wednesday. Speaking of which...

There are some shirts you could legitimately call masterpieces – the blue and gold of Boca Juniors, or the elegant green of early ‘80s Saint-Etienne, for example – but not many clubs have had a genuine, world-famous artist involved in designing their kit.

Admittedly Salvador Dali had no idea in 1969 that his Chupa Chups logo would appear on Sheffield Wednesday’s shirt 30 years later, but until David Hockney is being commissioned to knock something up for Bet4Eva.com, the Owls are in the minority.

If you already know what Soula is, it’s probably best you don’t admit it – unless you’re a fan of Greek side Voukefalas, that is. If that’s the case, you’ll be well aware that it’s a brothel from the city of Larissa that sponsored the local team in 2012.

Blaming a lack of funding from the Greek authorities, the club’s president said the deal was struck for “purely economic reasons”. Allegations from away fans that Voukefalas couldn’t score in a brothel remain unproven.

Atleti’s second appearance on this list probably says all you need to know about the club’s financial troubles once upon a time. In 2003, the club signed a sponsorship deal with movie studio Columbia Pictures, and as a result had to give up their shirt to flicks of varying quality throughout the season.

The best? Either Guillermo Del Toro’s comic book adventure Hellboy, or Bad Boys 2. The worst? Take your pick from White Chicks, Spanglish or Anacondas: The Hunt for the Blood Orchid. No wonder Fernando Torres left.

Some of the world’s best players have been smokers: Johan Cruyff, Diego Maradona, Gazza, and, er, Federico Macheda. But none of them ever played for West Brom.

Why? Because they’re too good (except for you, Federico), and also perhaps because the West Midlands Health Organisation paid to display ‘no smoking’ signs on the Baggies’ shirts in the mid-eighties. Whether they had a problem with players nipping off for a fag during matches isn’t clear, but you can never be too careful right?

Mogwai are by no means the first band to sponsor a football team. Super Furry Animals splashed their logo across Cardiff City’s shirts for the Welsh Cup in 1999; Pulp’s Nick Banks (nephew of legendary goalkeeper Gordon) had his band’s emblem plastered across the shirts of his daughter’s under-14s team; Motorhead sponsored Greenbank U10s; Goldie Lookin Chain got themselves on a Newport shirt.

But Wet Wet Wet arguably started it all by pumping some of their pre-Love Is All Around royalties into their hometown team in 1993.

Apparently when companies come up with product names these days, they have to check every language on the planet to make sure the moniker they’ve settled on doesn’t mean something obscene elsewhere in the world.

Arsenal’s Sega shirts, for example, went down well in Italy because the gaming brand’s name means ‘wanker’ in Italian. On the flipside, Milan’s Pooh Jeans didn’t raise as many eyebrows in their homeland, but it’ll always be funny to us.

When you’ve given the world the Drunken Bakers, Big Vern and Alexander Graham Bell-End you can do what you want, so in 1993 Viz decided to sponsor Blyth Spartans – the only team in English football that sounds a little bit like something you’d find in the Profanisaurus.

Viz’s biggest contribution to football before that was probably Billy the Fish: Fulchester United’s semi-aquatic goalkeeper.

Back in Everton’s glory days of the early ‘80s, their famous blue shirts carried the name Hafnia – a processed meat company from Denmark. The weird bit? Hafnia products weren’t available to buy in the UK and Everton didn’t get a Danish player on their books until 1997.

The Hafnia brand disappeared shortly after it vanished from the Toffees’ shirt in 1985, but reports last year suggest that it could be on the way back. It’ll fit right in next to Angry Birds...