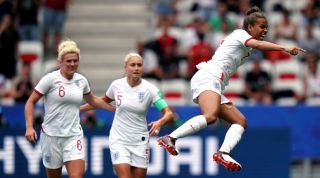 Room behind the full backs

England’s full backs, Lucy Bronze and Alex Greenwood, both provided real danger pushing forward throughout the game. On the right flank in particular, Bronze’s link-up play with Nikita Parris was exceptional, and the latter fully deserved her player of the match award.

However, you can see why Phil Neville, who has praised Bronze as the best right-back in the world, has experimented with the 27-year-old in a more central midfield role – despite it clearly not being where she is most effective.

When Bronze bombs forward, it can leave gaps on the wing that stronger teams could punish. This is not a question of Bronze’s talent – she is obviously fit enough to shuttle up and down the pitch all day long – but whether the system can compensate to fill in against quick counter-attacks.

Despite a lot of pressure, particularly in the first half, Claire Emslie’s 79th minute goal made the final period of the match a lot tighter than England would have hoped.

The first goal came from a penalty which, while the correct decision, is easy to imagine would have been missed pre-VAR. While they may have had two goals (again, correctly) ruled out for offside, with 14 shots over the 90 minutes there is still a sense that – like the men’s team in last year’s World Cup – the goals are not flowing from open play quite as easily as they should. This certainly was the case in last week’s warm-up friendly against New Zealand, and it could have caused the Lionesses problems here.

Kirby not at her best

Fran Kirby has had an intermittent season with injuries and, while she was far from absent in this game, she was nowhere near her best, and was eventually substituted for 20-year-old Georgia Stanway. Is she a certified starter for the next two group games?

Is this the first XI?

Neville has said that he has known his best XI that he planned to use against Scotland for some time, but a knock to Barcelona’s Toni Duggan meant she spent the whole of yesterday’s game on the bench; Beth Mead performed well on the right wing.

Judging by her training schedule, Duggan still seems to be working back to full fitness, but you would expect her to be back in the mix for Friday’s game against Argentina. Could she be an automatic starter?

Just 13,188 people were at the game in Nice, in a stadium with a 36,000 capacity. Generally speaking, this is not terrible for a Women’s World Cup group game, and is far above the average attendance for top flight women’s games in England. Bear in mind, too, that half of Scotland’s team only play semi-professionally.

But given FIFA’s trumpeting of “sold out” games, with warnings that tickets were only available for “some games” (read: the majority of matches), there were higher expectations.

With 6.1 million people watching the match on BBC One, it can’t simply be a reflection of interest: there’s also a sense that pretending the games are selling out might actually be deterring sales, not boosting them.