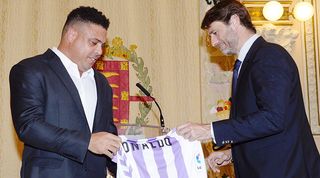 Ronaldo returns to Camp Nou in a new role

Barcelona fans don't like Ronaldo. The Brazilian superstar spent what was arguably the best season of his career at the Camp Nou in 1996/97, but then forced a move to Inter and later joined their hated rivals Real Madrid. He now fully identifies with Los Blancos, served as their ambassador, and even presented Vinicius Junior at Santiago Bernabeu in July.

A couple of months later, though, he had started a curious project by becoming the owner of Real Valladolid. The newly promoted club were delighted to greet such a legend, and Ronaldo has ambitious plans for the northern Spaniards; indeed, he recently stated that "we're about to take Valladolid to another level and make it famous nationally and internationally". The structure is supposed to be reorganised, a new sport city is to be constructed and the stadium will be renovated too.

First, though, Valladolid must survive in La Liga – and that is not a straightforward task, with the team just three points above the relegation zone. On Saturday, Ronaldo will go to Barcelona in a new capacity, surely knowing that Valladolid's last win at the Camp Nou was in 1997 – just after he flew off to Italy.

Bayern Munich started the season with a perfect record when they hosted Augsburg for the Bavarian derby in late September. Coach Niko Kovac fielded a weakened lineup, but the champions seemed to be cruising towards another three points. Then disaster struck after 87 minutes from an extremely unlikely source – Felix Gotze.

The younger brother of Mario joined Bayern’s academy from Dortmund in 2014, following the famous controversial transfer of his sibling. The towering centre-back failed to prove himself, however, and was discarded last summer. He duly joined Augsburg, and the game at the Allianz Arena was only his second for the new club. Gotze entered as a substitute, took advantage of a Manuel Neuer mistake and nudged the ball over the line to steal a point. That disappointing result sparked a terrible run form at Bayern that nearly cost Kovac his job a month later.

Fittingly, Gotze has done absolutely nothing since. He was used as a late sub three more times, and then spent weeks injured. The 21-year-old is back to fitness, though, ready for another derby against his big ex-club.

Have Milan found the new Kaka?

It wasn't the most hyped January transfer, but it probably should have been. For Milan fans, it brought some high hopes. Lucas Paqueta, acquired from Flamengo for €35 million, has always admired Kaka and seen him as a role model. It's why he chose to join the Rossoneri ahead of other lucrative offers.

Sporting director Leonardo, who brought him to San Siro, was also the man behind the Kaka deal in 2003. Could the 21-year-old become the long-awaited heir to the man who led the club to Champions League triumph in 2007, then won the Ballon d'Or?

It's very early to make big statements, of course, but first impressions have been phenomenal. Paqueta is graceful, his ball control exquisite, and clearly has the self-confidence make it as a star. The Brazilian provided assists to fellow new signing Krzysztof Piatek in the Coppa Italia win over Napoli and Serie A draw at Roma.

Last Sunday he scored his first goal for the club in a 3-0 win over Cagliari, and now all eyes are on him ahead of a tricky visit to Atalanta on Saturday. The team from Bergamo boast the best attacking record in the league, and are just a point behind Milan in the fight for a Champions League spot. It should be a cracker.

"No one likes us, we don't care." That's the famous Millwall chant, and Wimbledon fans easily identified with it too during the raucous Crazy Gang days.

Those were the tough, no-nonsense teams nobody wanted to face. Millwall and Wimbledon would never be popular with the purists, but in many ways they were the faces of traditional English football. It only adds to the ill feeling that Wimbledon's last south London derby before the club was "stolen" came against Millwall in 2004.

AFC Wimbledon, established by fans, are much more attractive to the neutrals, but the upcoming FA Cup tie with Millwall brings old memories back. Dons against Lions feels like the perfect Dennis Wise derby; passionate and authentic. It won't make big headlines, but those who attend will relish the atmosphere, and the prize of reaching the quarter-finals is huge.

Defense and Justice rule in Argentina

It is unclear how Defensa y Justicia (Defense and Justice) got their unusual name, but the modest outfit from a southern suburb of Buenos Aires are now making huge headlines in Argentina for the right reasons. With 12 wins and six draws from 18 matches, they join Juventus as the only undefeated teams in major leagues around the world.

Level on points with Racing Club, they are miles ahead of the rest – including third-placed Boca Juniors and seventh-placed River Plate – and a sensational title triumph looks a real possibility for a club that were only promoted in 2014. On Saturday, they are favourites to get a sixth consecutive win at Gimnasia La Plata.

Their phenomenal success has been achieved with a modest squad thanks to the talents of 38-year-old coach Sebastian Beccacece. The long-time assistant of Jorge Sampaoli only started his independent career in 2016, and is now in his second stint at Defensa y Justicia after working under Sampaoli with Argentina during the World Cup. At this rate, Beccacece could become more successful than his mentor.

Speaking of magnificent names in South America, don't miss Club Always Ready, who have returned to the top flight in Bolivia. The minnows are not always ready in their relegation battle, but Bolivar's Juanmi Callejon is. Napoli star Jose Callejon's twin brother is having fun this term, and has scored for the last four games in a row. On Saturday, he would love to continue that run when Bolivar host Always Ready.

Hamburg to be punished?

The story of Hamburg's season is quite strange. The giants, relegated from the Bundesliga for the first time in history last season, are top of the second division despite playing poorly. They have, however, been efficient: 10 out of their last 11 wins were achieved by a one-goal margin.

Their goal difference at home is zero, and they have only scored 28 times in 21 matches. Tiny Heidenheim have been far more stylish down in fourth place, just six points behind HSV. On Saturday they host the leaders, and will rightfully fancy their chances of getting a result. Watch this space.

Braga to stay in title race?

QUIZ Can you name the 2014 World Cup final line-ups for Germany 1-0 Argentina?

Porto are consistent at the top of the Primeira Liga, and Benfica are back on track under their new coach Bruno Lage, having just thrashed Nacional 10-0.

However, Braga are also still very much in the title race, just two points behind the Dragons and one adrift of the Eagles. They have only lost twice this season – away at Porto and Benfica – and on Sunday have their last tough away fixture this term at Sporting.

If this attractive team manages to beat the Lions, they can remain hopeful of winning the first championship title in their history. It could certainly be a defining achievement for Braga coach Abel Ferreira, who spent five years at Sporting as a player, and started his managerial career at their academy.

SEE ALSO What happened to Adriano? The dark story behind Brazil's party boy who could have been a great