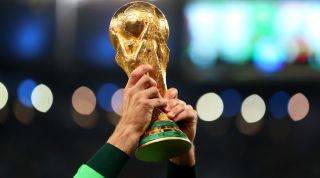 World Cup finals are, unfortunately, rarely classic games in themselves. The magnitude of the occasion and the fact that both teams have played several crunch games in quick succession, often in sapping conditions, tends to result in tight and tense affairs.

That was certainly the case four years ago when Germany and Argentina played out a goalless 90 minutes then headed to extra time. However at least (as in the 2010 final when Spain pipped Holland) the extra half-hour did deliver a goal.

A German substitute volleyed home a fine goal on 113 minutes and that settled the game. But can you name the goalscorer and the other 27 players who took part that day (both sides having used all three of their subs)?

We’ve put eight minutes on the clock for you to try and name both teams starting XIs and substitutes. Let us know your score @FourFourTwo – we’ll retweet the best, if you don’t give answers away. Please challenge some pals while you’re at it too.