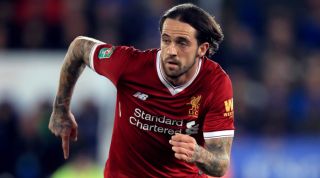 A fun if often frustrating player at Newcastle, the France full-back has been unreservedly frozen out in north London during the past year-and-a-half, and coastal moves to Nice and Brighton both collapsed at the last minute over summer. “I am training with the professionals during the week and I am playing with the youngsters at the weekend,” he lamented back in September. “I am not the future.”

Although Arsene Wenger praised Debuchy’s “mental strength” as recently as last month in the wake of his Europa League goal against BATE Borisov, the compliments never stretched beyond platitudes. It's a staggering fact that since joining the club for £12m 2014, Debuchy has only played 13 Premier League games – which, once wages are factored into his fee, tallies up at over £2m per league appearance.

Bad luck with injury accounts for much of that, of course, but Debuchy’s career needn’t be over just yet – he's still only 32. His career at the Emirates, though, certainly is.

The winger signed in that disastrous post-Luis Suarez splurge is, believe it or not, part of Liverpool’s squad this season. The fact that his sole involvement in first-team affairs so far has been as an unused substitute for a single League Cup tie suggests, however, that he may not be for much longer.

As it stands, Markovic exists as an object lesson in how a badly judged move can derail a player’s career. He was a 20-year-old, thrillingly mercurial winger when snapped up for £20m four years ago, but his career since has constituted three abortive loan spells and a despondent failure to make the most of the paltry half-chances he’s been given at Anfield.

Some good form for a briefly resurgent Hull at the back end of last season was a reminder that an electric player still exists in there somewhere. A similarly low-key move in January could, just maybe, work a treat for all involved.

At first, Colback’s decision to incite the wrath of Wearside by jumping ship from Sunderland back in 2014 looked like a smart one. The midfielder was a fixture in Newcastle’s midfield during his first two years at St James’ Park, with his tidy ball-playing game showing a maturity that suggested he’d be at the heart of his side’s future.

Yet despite remaining central to Rafa Benitez’s set-up throughout last season’s promotion campaign, he has been comprehensively bombed out in the months since. If injury to Mikel Merino – a similarly diminutive midfield passer – offered a ray of light in November, the manager quickly plunged the 28-year-old back into darkness. Benitez made it clear he’d sooner man his engine room with an out-of-position Chancel Mbemba than with Colback.

Assuming the 28-year-old takes the hints and gets on his bike – and provided he’s capable of the level he played at a couple of years back – there could well be a canny signing for a club willing to take a small risk.

When Pep Guardiola came to blows with Yaya Toure shortly after joining Manchester City – or more accurately his agent, Dimitri Seluk – it looked like the curtain was drawing on the great midfielder’s City career. Thankfully, both manager and player were able to put any petty differences aside and Toure had a welcome return to the fold last term, making 22 Premier League starts as City underwent in their first season of the Great Guardiola Reboot.

This season, however, that figure has dropped rather starkly – to zero, in fact. And while the 34-year-old Toure may have plenty to offer off the pitch, he surely has something to offer on it too – if only for a little while longer.

Admittedly only a small clutch of clubs would be able to afford Toure’s wages, many of which City wouldn't be keen to sell to. But is there a more glorious idea than one of the greatest midfielders to have played in England recharging his engine for one last job?

From the vantage point of January 2018, it now seems like a bizarre trick of the memory that Tottenham once made a £25m bid for the hot young goalscorer Saido Berahino. Yet it did happen and, even more oddly, it happened for good reason.

Berahino is going through the sort of dry spell that would make a monk wince – ludicrously, it’s closing in on 700 days since he last introduced ball to net. His downward spiral has been the product of a perfect storm of calamities, ranging from an ill-thought move to injury, illness, a three-month drug ban, some catastrophic misses and simply being part of a very bad team.

Though an imminent change of manager may offer the forward a fresh start, the most likely way of ensuring that he gets one would be to cut his losses and move elsewhere. Anywhere. Surely the thought of playing regularly – and perhaps even scoring regularly – for an aspirational Championship club is more than enough to excite a player in Berahino’s position? At 24, he needs to start making up for lost time.

While it’s been fashionable for a number of years to accuse Walcott of stagnating, the truth is that he’s been a perfectly serviceable attacker during his 12 years at Arsenal, hamstrung largely by the over-inflated expectations brought on by Sven-Goran Eriksson’s absurd decision to take him to the 2006 World Cup.

This season, though, those accusations have turned into something of a self-fulfilling prophecy. His four league outings speak of a player who has faded badly into the background. While the uncertain futures of Alexis Sanchez and Mesut Ozil mean several of Arsenal’s second-choice attackers may suddenly find themselves with renewed hope, the cold, hard truth is that Walcott has fallen away so grimly of late that a change of scene can be the only way forward.

If a badly timed transfer can put the kibosh on a footballer’s career, a badly timed injury can do so with double the cruelty. Danny Ings managed to endure both at once, signing for Liverpool after an impressive season with Burnley and, after a promising three goals in his first nine outings, promptly shredded his knee ligaments which sidelined him for seven months.

Weeks after making his comeback, his other knee buckled: he was out for another nine months. By the time Ings returned in September 2017, Liverpool had acquired another striker, three new wingers and generally honed an elite-level attacking unit that falls squarely within the “ain’t broke, don’t fix it” bracket.

That’s the bad news. The good is that Ings is 25, talented and has been lavished with praise by every manager he’s played under – not least Jurgen Klopp. He will likely want to at least try to prove himself at Liverpool, but the more realistic option in the short term may be to offer his services for a club that truly needs them. In a league filled with non-scoring strikers outside of the top clubs, there should be no shortage of takers.

Just as cult films are often bad films, cult hero footballers aren’t always the finest exponents of their craft. In that vein, Mitrovic is certainly a cult hero at St James’ Park, but how good a striker he is remains a much-debated topic.

Rafa Benitez appears far from convinced, having yet to grant him a start in the league this term, with Dwight Gayle, Ayoze Perez and Joselu all preferred in the lone-striker role.

His nine top-flight goals two seasons ago are proof of the 23-year-old's ability to score at this level, but his wild temperament could dissuade suitors from taking a punt on the targetman in January.

Should any be willing to gamble, they would find themselves with a no-frills striker who is aggressive, strong, ruggedly likeable – and has six months to earn his spot in Serbia’s World Cup side.