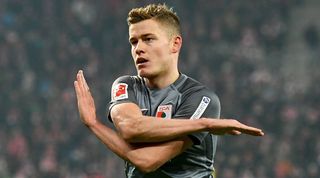 Pep Guardiola is searching for the last piece of his jigsaw at Manchester City; one which will complete his side for their final assault on the Premier League title and Champions League. With Vincent Kompany's fitness issues a concern and doubts over Eliaquim Mangala's ability, the former Barcelona and Bayern Munich coach has pinpointed central defence as an area for bolstering this January.

Yet such are the high standards at the Etihad that options are limited. Who can realistically adapt to City's high-pressing, intricate positional play so seamlessly? Perhaps Guardiola can look in the Bundesliga for that answer in RB Leipzig's 19-year-old central defender Dayot Upamecano.

Reared in the Red Bull football family – first at Liefering, then RB Salzburg – the French teenager has impressed in the Bundesliga. His frame fits the robust demands of the Premier League, but his reading of the game and anticipation in a high defensive line is exceptional for a player of his age.

Leipzig's sporting director Ralf Rangnick knows the potential curve in Upamecano's development, and has apparently slapped a €100m buyout clause on his contract. If there's one club who could be willing to push the boundaries for the last few per cent, it's the Premier League table-toppers.

Talent spotter Michael Reschke has a reputation for finding future stars. There's Joshua Kimmich, Germany's best right-back; then Santiago Ascacibar, Stuttgart's Argentine warrior in midfield. Therefore, it's little surprise that Benjamin Pavard, plucked from across the border in France, is progressing towards an outstanding career in the game.

Pavard has made an instant impression. After a few months in the Bundesliga, having joined from Lille, he was called up to the French national team. The 21-year-old is an adept passer of the ball, and can roam from defensive positions to step into more attacking positions.

Comparisons have been made with Bayern Munich defender Mats Hummels, who shares the same aggressive defensive style when in possession. Stuttgart is hardly the worst environment to develop in European football, but if Hannes Wolf's side can't match the upward trajectory of Pavard's career then the youngster will soon be on his way.

Top-class centre-backs are often hard to acquire – particularly in January. So what better than to secure the services of an elite-level talent before he's destined for the top?

At 28, it's a bit of a mystery that Finnbogason has yet to be given a chance at one of the continent's biggest clubs. The Augsburg hitman has proved himself a deadly force in the Bundesliga with 21 goals in 45 appearances for the Bavarian club.

A strong and aggressive central striker, Finnbogason was previously on the books of Real Sociedad, Olympiakos and Heerenveen before his move to Germany. The Dutch top flight was food and drink for the Iceland international – he scored 53 goals in 62 games in the Eredivisie.

As the likes of Vincent Janssen have shown, however, the Netherlands can be deceptive when it comes to identifying prolific strikers. However, Finnbogason appears to settle a few of those arguments – he can play in other countries with varying styles, perform in one similar to the Premier League, and also score goals at international level.

Given Finnbogason's relative affordability, he could be a fine January addition for many sides who are struggling for goals this season.

Goretzka's future will enter a decisive phase over the next few weeks. The 22-year-old's contract at Schalke will expire this summer, but the end result remains unclear. Will Goretzka commit his future to Schalke and stay put in the Ruhrpott? Or will the German be tempted by the lure of competition at the highest level in Munich or further afield?

Most predict the latter, but there's no decision from the Bochum-supporting midfielder. This presents an opportunity for England's top clubs: Goretzka is an outstanding talent who already shows great maturity and leadership qualities. It would be lazy for the likes of Arsenal, Manchester United and Liverpool not to ask the question.

Goretzka's game has great variation; he has options in his toolbox depending on the role he's given within the team. He can dominate the play, penetrate defensive lines from deep positions, all while bringing tenacity and aggression to second ball situations. This would tick practically every box in the Premier League manual.

A free transfer may be an option depending on the competition, but it's not unrealistic that England's top clubs will have the financial might to tempt Schalke. The Royal Blues don't hold a strong hand in negotiations given their poor finances, so the door is open for a late swoop.

The Premier League may boast eye-watering riches, but many clubs won't be willing to make drastic outlays in the upcoming transfer window. January is a time for fine tweaks, not wholesale changes, but Germany's market caters for such wishes given the depth of quality in the division.

A goalscoring centre-forward remains the hottest position in any squad and, with the UK often unable to take advantage of players outside the EU, the potential candidates are limited for a Premier League club. One realistic option could be Hannover's 24-year-old striker Niclas Fullkrug, who has yo-yo'd between the top and second divisions in Germany. At the winter break, Fullkrug had netted five times in 17 appearances for newly promoted Hannover.

A product of Werder Bremen's academy, he won't bring spectacular results on his own, but would be an excellent final addition at the top of the attack. He’s scored goals at a decent rate over a few seasons, boasts athletic attributes in speed and power, and can likely adapt to the British game. At around €4m or €5m, there won't be many stronger options for teams at the bottom end of the table.

Max stepped into large shoes when he signed for Augsburg from Karlsruhe in 2015. The Bavarians had just sold Baba Rahman, the galloping Ghanaian left-back, to Chelsea for around €20m. The less said for Baba’s development the better, though – unlike Max, who has risen to become one of the most exciting left-backs in the Bundesliga.

The 24-year-old, formerly on the books of Schalke and Bayern, has not gone unnoticed. Max has already attracted interest from Manchester City and Manchester United, who are both looking to add reinforcements in this area of the pitch. Guardiola and Jose Mourinho have had to turn Fabian Delph and Ashley Young into makeshift wing-backs at times this season.

Max could potentially be bought out for around the same fee as Rahman. The German doesn’t boast the same acceleration and scoring threat, but his more balanced style has allowed him to combine strong defensive attributes, athleticism and attacking skills on the wing. Max has contributed to 10 goals this season (a league-high nine assists, one goal), off the back of setting up three last term.

Given his quality, there’s little doubt that Max would comfortably upgrade the two Manchester clubs in the left-back position right now.