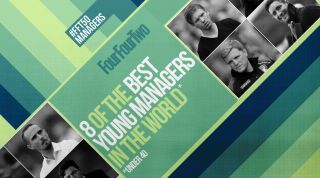 Do not adjust your sets. Nagelsmann is, indeed, still a year shy of his 30th birthday. In fact, he only turned 29 last Saturday and there were considerable grounds for celebration. Previously the highly rated under-19 coach at Bundesliga club Hoffenheim, he had been set to take over for the 2016/17 season but his appointment was brought forward after Huub Stevens’s resignation in February.

The Bundesliga’s youngest-ever manager faced an almighty mess, with Hoffenheim appearing certainties for the drop. He dragged them out of trouble, finishing a point clear of the relegation play-off spot, and there will be plenty of attention next season on an astute young coach who counts the styles of Villarreal, Barcelona and Arsenal among his influences.

Sometimes it appears that everything Eddie Howe touches turns to gold. The Bournemouth manager’s two spells in charge of the club where he spent 11 years as a player have amounted to one gigantic fairy tale – and it was little surprise to see him linked with the recent England vacancy.

In 2009, at the age of just 31, Howe hauled the Cherries away from the League Two relegation zone despite a 17-point deficit; fast-forward seven years and they are a Premier League club with big ambitions, playing some of the most exciting attacking football in the land when in full flow. It seems a matter of when, rather than if, Howe is offered one of the country’s top jobs.

It raised an eyebrow or two when Silva was linked with the Nottingham Forest role earlier in the summer. The Portuguese coach resigned as Olympiakos manager in June, citing personal reasons, but might justifiably hope his next club is higher up than England’s second tier. Silva led unfashionable Estoril to fourth place in the 2013/14 Primeira Liga, having taken the position at the age of 34.

His success there led him to Lisbon giants Sporting, where he was sacked despite winning the Portuguese Cup. Reports that he was dismissed for not wearing the club’s official suit at a game are probably exaggerated; whatever the reason, he didn't let it put him off in Greece – his season in Piraeus brought a league title with six games remaining and a famous Champions League win at Arsenal.

With the benefit of hindsight it only seems more remarkable that England’s run to third place at the 2015 Women’s World Cup was masterminded by a man who, at the time, was just 32 years old. Sampson, who took over in December 2013 after coaching Bristol Academy, has done a superb job in advancing the national team and it would be little surprise to see a men’s outfit – perhaps in the Football League – make a strong play for his services eventually.

That will probably have to wait for now, though: Sampson has guided England to next summer’s European Championship, which will be played in the Netherlands, and has promised they will be a “nightmare” for opponents. Sampson himself might find that he is a chairman’s dream.

It takes something to carve out a spectacular football career when you stand at 5ft 5in, but Gallardo certainly managed it with River Plate, Monaco and Argentina – and is now making a stunning impact back at the club where he made his name. After cutting his teeth with Nacional Montevideo in Uruguay, winning the league title in 2012, he made a much-trumpeted return to River in June 2014 and the successes have kept on coming.

Using a free-flowing style in his own image, Gallardo took them to the 2014 Copa Sudamericana title and last year went one better to beat Mexican side Tigres in the Copa Libertadores final – bringing River the most vaunted trophy in South America for the first time since 1996. Defeat to Barcelona in the FIFA World Club Cup final was hardly a bitter pill; Gallardo has been an overwhelming success.

It might seem as if he's been around forever, but Villas-Boas doesn't turn 40 for another 15 months and the wealth of experience he has picked up in the last seven years may yet create a manager in the very top bracket. His long, drawn-out farewell to Zenit St Petersburg – where he never settled despite winning the Russian league title in 2015 and taking them to the Champions League last 16 – was finally completed in May and he has expressed a wish to take a year out before his next challenge.

Perhaps that would be sensible: he was judged harshly in some quarters after spells at Chelsea and Tottenham went wrong despite signs of genuine encouragement in both, and some time taking stock should leave him ready for another tilt at one of Europe’s top leagues.

Hertha Berlin may have fallen away in their unlikely bid for Champions League football last season after a late collapse – instead they face Brondby in the Europa League third qualifying round, starting this week – but it was about time the side from Germany’s capital started dreaming big and the man to prompt that reverie was club legend Dardai.

The Hungarian made 286 Bundesliga appearances during a 14-year spell as a player with Hertha and then, in a year overseeing his national team, set in place many of the foundations on which Bernd Storck built so successfully at Euro 2016. He took over at Hertha in May 2015 and, while two points from their final seven games were an anticlimactic end to the campaign, looks to have set them fair for a bright future.

Johnson comes from excellent managerial stock: his dad, Gary, currently manages Cheltenham Town and has been around a few blocks during a 30-year career in the dugout. Gary spent almost five years at the Bristol City helm between 2005 and 2010, but there was no nepotism involved when Lee took the same job in February – he’s regarded as one of England’s most exciting young coaches and had already made his own name.

A good two-year spell at cash-strapped Oldham was followed by a year at Barnsley before ambitious City, who will be looking to push into the Championship’s top half this season, lured him to Ashton Gate. Should he succeed there, he will surely pop up on bigger clubs’ radars.

FourFourTwo's 50 Best Managers in the World 2016