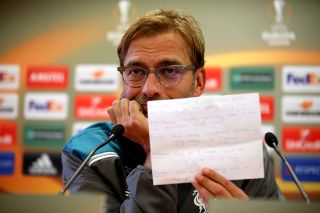 The Germany international of Turkish origin would be an asset for pretty much any side, and was the man who made Dortmund tick in a midfield holding role against Stuttgart. Gundogan was the key man at the start of Dortmund's attacks on Sunday afternoon, completing a highly impressive 92 of 100 passes attempted, and also showing clever footwork to move forward and make something happen in the final third.

The 25-year-old created two chances and shouldered a lot of defensive responsibility too, shielding the two centre-backs as both full-backs and fellow central midfielders Gonzalo Castro and Shinji Kagawa looked to get forward at every opportunity in this offensive Dortmund side.

Gundogan, who often plays as one of the two more advanced central midfielders and moved into that role later in the game, would undoubtedly be a player who could make an impact at Liverpool but the Jurgen Klopp factor would have to play a major role for any deal to happen.

The former Nuremberg man signed a new contract in the summer after turning down interest from elsewhere, at a time when Manchester United and Arsenal were linked. His new deal keeps him at Dortmund until 2017, but it would take a lot to persuade him to leave so soon after putting pen to paper.

It's not long since Hummels was rated as one of the best centre-backs in the world after playing a key part in Germany's World Cup glory. But the 26-year-old has not fared as well in recent times and was named only as a substitute against Stuttgart, the first time he hasn't started a Bundesliga game this season.

Dortmund boss Thomas Tuchel played down the selection decision, pointing to the fact that Hummels had played a lot of football this season. But the centre-back conceded a penalty in Thursday's Europa League defeat at Krasnodar, days after scoring an own goal in a 3-1 loss at Hamburg.

The centre-back was introduced for the final 10 minutes against Stuttgart to shore things up, and now he must now try to displace Sven Bender or Sokratis Papastathopoulos at Wolfsburg.

Hummels said in the summer that he had 'decided not to make a move this year', following interest from Manchester United, and he remains Dortmund's club captain. The club are continuing with their attempts to tie him down to an extended contract, with his current deal expiring in 2017. Liverpool may need to strengthen at centre-back and, although there is likely to be plenty of competition should Hummels ever become available, Klopp could be forgiven for keeping a close eye on his former club's team selections in the weeks to come.

Subotic lined up alongside Hummels in central defence in the Borussia Dortmund team that reached the Champions League final in 2013, but things haven't gone well for him recently either.

The Serbian started Klopp's last game as boss, the German Cup final against Wolfsburg, but has made only two appearances this season. That, despite Dortmund's vulnerablity in defence at times – they have scored an impressive 40 goals in 14 games but have conceded 19. Bayern have shipped only five.

Subotic was hampered by injury earlier in the season but has been an unused substitute in recent matches and was not involved in the 18-man squad against Stuttgart. The 26-year-old is now starting to be heavily linked to Liverpool, and Klopp will know what his former star is capable of when on top form.

Chances of luring him from Dortmund: 8/10

The man who got his chance at centre-back against Stuttgart was Bender, who has often previously operated in a holding midfield role. The 26-year-old displayed just how comfortable he is on the ball as he completed an incredible 103 passes (the entire Stuttgart side managed only 184 between them).

Bender also topped the tackle count (four), completed five interceptions, won all three aerial duels and made four clearances – as many as anyone on the field. All in all, it was a pretty busy day for the defender, who moved into midfield for the final 10 minutes when Hummels was introduced.

The former 1860 Munich player was only making his second league start of the season – no wonder he had so much energy – and had previously been linked with Spurs and Arsenal after losing his place in midfield. Liverpool have already seen the value of Emre Can's ability to switch between midfield and defence, but Bender will hope to keep his place in the Dortmund team after this all-encompassing performance.

Chances of luring him from Dortmund: 6/10

It was Klopp who prevented Mkhitaryan from joining Liverpool in 2013 when he swooped to sign the Armenian from Shakhtar Donetsk. The Reds were keen then and they were linked again this August. The 26-year-old was a constant danger against Stuttgart as one of Dortmund's interchangeable front three, featuring on the right for much of the game and adding a real dynamism to the attack. Mkhitaryan completed an impressive 10 take-ons and had four shots, forcing the save that led to Dortmund's first goal. He was always looking to use movement or a clever pass to get in behind Stuttgart and looks like a player who would have no problem adapting to the Premier League, with Klopp describing him as 'one of the best players in the world'.

Mkhitaryan is very much a key player for Dortmund, though – despite an iffy season last time around, he has 13 goals already this term. Another player whose contract expires in 2017, the Signal Iduna Park club want to tie him down to a new deal and would seemingly need severe persuasion to sell.

In an ideal world, Liverpool would surely love to have a forward like Aubameyang. The Gabonese hitman has had a stunning season and his two goals against Stuttgart took his tally to 25 in just 23 games this term – 17 of them coming in only 14 Bundesliga matches. That's three more than Robert Lewandowski, and Aubameyang's total in all competitions is already his best ever haul, matching last season's tally.

Like most Dortmund players it seems, Aubameyang is 26 years old and has pace to burn. He tore Stuttgart to shreds at times, firing in six shots and finding the net with two superb finishes.

But Aubameyang's value has shot up, and the chances of Dortmund letting him join Liverpool right now are extremely slim. The player himself has said that he wants to move to La Liga next to fulfil a promise to his late grandfather, who was a Real Madrid fan. There were also reports that Klopp considered selling Aubameyang during their time together at Dortmund, after the striker made a slow start to Bundesliga life.

Chances of luring him from Dortmund: 2/10

Simon Mignolet hasn't always endeared himself to Liverpool fans since being installed as the club's first-choice goalkeeper two years ago but has had little in the way of experienced competition for the jersey.

Weidenfeller was Klopp's No.1 for the most part at Dortmund but the 35-year-old has only featured in the Europa League this season after losing his place to Roman Burki, a summer signing from Freiburg. Weidenfeller's peak years may potentially be behind him, and he wasn't at his best last season, but he could at least provide an experienced alternative to Mignolet if Klopp decided to make a move.

Chances of luring him from Dortmund: 7/10

Reus largely operated on the left against Stuttgart on Sunday and it was his dangerous cross that was turned in for an own goal by Stuttgart's Georg Niedermeier for Dortmund's third. His end product wasn't always as good as Mkhitaryan and Aubameyang's, but the swarming attacking trio gave their opponents nightmares throughout with their pace and skill.

Reus has been linked to a move to England for some time now, so it was little surprise that his name was one of the first to be speculated about when Klopp took over at Liverpool.

Another of Dortmund's gaggle of 26-year-olds, BVB would be keen to retain the German international and the sort of fee required to change that stance could potentially be out of the Reds' reach.

Sahin's name is an intriguing one to have been linked to Liverpool in recent times, given that he made so little impact in his loan spell at Anfield from Real Madrid during the 2012/13 campaign.

The Turkish midfielder felt he had been played out of position by Brendan Rodgers and soon returned for a second spell at Dortmund with Klopp. The 27-year-old hasn't played since February because of a knee injury but reports have suggested that Klopp could be tempted to bring him back.

It would be a risk, given how his previous spell in England went (he scored three times in 12 appearances in all competitions, including a League Cup double at West Brom – not terrible for a defensive-minded player), but Klopp has shown that he is capable of getting more out of Sahin than anyone else.

Chances of luring him from Dortmund: 6/10