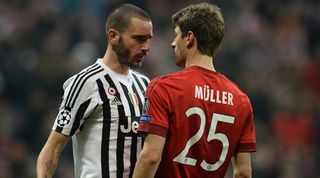 Perisic only joined Inter from Wolfsburg last summer, but Roberto Mancini’s side’s likely failure to qualify for the Champions League could see the Croatian depart in the upcoming close season.

The 6ft 2in winger, who’s primarily been deployed on the left flank but is capable of playing right across the forward line, has six goals and four assists to his name this term, with the 27-year-old requiring little time to adapt to a new league.

Signed for around £14.5 million in August, Inter will want to recoup that money at the very least.

Manolas has regularly been linked with a transfer to the Premier League throughout the last couple of years, with Manchester United, Arsenal and Chelsea all rumoured to be interested at various points.

Conte is thought to be a fan of the Greek and could push a deal through in the coming months, particularly as the 24-year-old has the potential to get even better in the future.

Extremely mobile across the ground, Manolas has the speed to play in a high defensive line, and he’s rarely beaten for strength either which makes him one of the best one-on-one defenders around. Reports suggest he’d set Chelsea back at least £30 million but Roman Abramovich, Michael Emenalo and Conte may consider that a price worth paying for a centre-back who could be John Terry’s long-term replacement.

There’s an argument to be made that Higuain has been the best striker in Europe this season, his 30 goals in 31 games for a Napoli side that most people expected to miss out on the top three perhaps elevating him above even Luis Suarez, Pierre-Emerick Aubameyang and Robert Lewandowski.

Whether that’s the case or not, it’s difficult to see Higuain remaining at the Stadio San Paolo beyond the current campaign, especially as the vast majority of the continent’s teams would be improved with him as their spearhead.

The Argentina international would not come cheap, but if Chelsea cash in on Diego Costa there should be enough money swilling around for a new centre-forward – and who better for that role than the prolific and obtainable 28-year-old?

The Sunderland forward, who’s spent this season on loan at Bologna, is a real favourite of Conte’s. His former boss at Juventus routinely called him up for international duty despite the availability of younger, more exciting alternatives.

“My rapport with the coach is strong because he wanted me at Juventus and expressed that with great determination,” Giaccherini said last month. “It was important for me to prove that I could belong at Juventus.”

He’d probably be a squad player at best were he to arrive in west London, but Conte may still want to bring one of his trusted lieutenants along for the ride.

The most sought-after player in world football will be on many a shopping list this summer, but Chelsea supporters will hope Pogba’s pre-existing relationship with Conte will count for something in the race to land the 23-year-old.

While their new manager did play a key role in his development from gifted youngster to world-class star, the lack of Champions League football on offer at Stamford Bridge could make it difficult for Chelsea to convince Pogba to ignore the possible overtures of Real Madrid, Bayern Munich, Barcelona and Manchester City to sign for them instead.

Pogba would command a huge fee too, with outspoken agent Mino Raiola claiming last week that Juve won’t accept anything less than £80 million for his client.

Bonucci dismissed reports linking him with a summer switch to Stamford Bridge – “the most I’ve followed him [Conte] is to get a coffee” – but the stories just won’t go away.

Along with Giorgio Chiellini and Andrea Barzagli, Bonucci has been a virtual ever-present in a notoriously mean Juventus backline in the last few years; a ball-playing centre-half whose touch and range of passing led Pep Guardiola to call him one of his favourite ever players recently.

The 28-year-old would be an excellent signing if Chelsea were able to lure him away from Juventus, a prospect that still seems unlikely.

Nobody has registered more assists (10) in Serie A than the Roma playmaker in 2015/16, while only Marek Hamsik has played more key passes.

Pjanic has also weighed in with nine goals in the top flight and another couple in the Champions League, getting back to his very best after a rather disappointing campaign last time out.

The free-kick specialist’s form over the last few months has inevitably attracted a whole host of admirers, but Chelsea appear to be in pole position to capture the 26-year-old ahead of next season.

Another Roma midfielder reportedly on Chelsea’s radar, Nainggolan’s game would, on paper at least, suit the Premier League perfectly.

The energetic and tenacious Belgian has all of the physical attributes needed to succeed in England; he’s not lacking in technical qualities either, with Nainggolan’s passing often underrated because of his all-action style.

Although his determination can occasionally spill over into ill-discipline – the former Cagliari man has been booked 13 times and sent off once for club and country this term – Nainggolan would be a terrific addition to the Chelsea ranks.

The flying Colombian is still on Chelsea’s books so wouldn't be a new signing, a fact that merely increases the probability of him being involved with the Blues next term.

It’s been alleged that one of the reasons Conte departed Juventus just days before the beginning of pre-season ahead of the 2014/15 campaign was the club’s unwillingness to buy Cuadrado, who is now on loan at the Serie A leaders from the Blues.

Able to play as a winger or a wing-back, Cuadrado’s versatility is likely to appeal to a manager who may not yet have decided whether to go with three or four at the back next season.