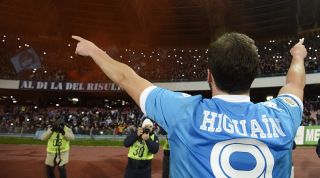 It's not succumbing to tiresome transfer window hyperbole to say that it's hard to think of a more wanted (and realistically gettable) footballer in Europe right now than Gonzalo Higuain. There’s certainly no striker currently in a more Midas-like run of form than the Argentine, who in the age of superstars and superclubs leads the continent’s scoring charts while falling proudly into neither criteria.

Bayern Munich have him in their crosshairs and, as is their wont, have wasted no opportunity to bat their eyelids furiously in their target’s direction. Chief executive Karl-Heinz Rumenigge has been the latest to take to sing his praises – and he’s not alone. “Of all the foreign players in Serie A right now, Higuain is my favourite,” chimed manager-in-waiting Carlo Ancelotti last month.

For now, though, he is going nowhere – and football is all the better for it. An Argentine forward, clad in that distinctive baby blue shirt and firing Napoli toward a title challenge is a sight guaranteed to warm the souls of the romantics. But Higuain’s story is doubly heartening in today’s landscape, where almost every top talent is concentrated within a tiny band of moneyed superpowers.

Having grown tired of life on Real Madrid’s peripheries back in 2013, Higuain has been around that block once already. Right now we can bracket him in that pleasing category of players who are more at home elevating an underdog than embellishing the establishment. His brace against Sassuolo last weekend not only took his own tally for the season to 20 in as many games but returned Napoli to the top of Serie A as the campaign’s business end looms.

For the most part, any comparisons with Maradona are simplistic and wrongheaded, but the legend bestowed by his predecessor is still significant, and not only because he greeted news of Higuain’s move to his honorary hometown with the declaration that he was “doubly overjoyed”. Maradona’s escapades in Naples (the league titles he took them to in 1987 and 1990 remain the club’s only two) not only added an enduring element of romance to the club’s reputation across the globe – and doubtless helped grease the wheels of Higuain’s transfer in the first place – but also imbued the club with the very Messiah complex that has helped its new idol blossom upon arrival.

Three decades after Maradona touched down on Neapolitan turf, Higuain needed merely to disembark his plane ahead of his big move to prompt the first acts of worship from adoring locals. The tone of reverence was confirmed a couple of months later, when his first Champions League goals had a packed San Paolo belting out his name again and again at deafening volume – a magnificent, defiant antidote to the many complaints of the sanitised status of today’s fan culture.

Plenty of sportsmen look to generate hostility and antagonism to keep themselves motivated, but Higuain is a player who thrives on goodwill. “A striker always likes to feel important,” he once said, which leads to the inescapable conclusion that he was never likely to find a Cristiano Ronaldo-dominated Real Madrid the most welcoming environment.

Not that his time in Spain was by any means unsuccessful, but a player who yearns for bespoke appreciation was always going to find himself punching against a glass ceiling when thrown into a throng of galacticos. “I was very happy in Madrid during some moments, but less happy in others. You suffer when you don't get to play for some time,” he later admitted.

Higuain’s time in Madrid also cemented an unfortunate trend which he has yet to shake off: that his level of achievement has tended to run in inverse proportion to his level of involvement. His early playing years at River Plate coincided with the club’s descent from Argentina’s power base, and while he collected consecutive league winners' medals upon joining Real Madrid, they came in campaigns in which he scored two and eight goals respectively, starting just 20 matches across both seasons. The following year, having elbowed his way to the front of the club’s pecking order, Pep Guardiola’s meddling kids went and hoovered up every trophy going.

Even in the 2011/12 season, in which Madrid sauntered to the title and Higuain nabbed himself 22 goals in the process, he was granted a starting berth in fewer than half of his side’s league fixtures, sharing centre-forward duties with Karim Benzema as both lived life wholly in the shadow of a certain other attacker (Ronaldo scored 46 times that season).

You could call this luckless success/involvement trade-off Pepe Reina syndrome (and interestingly, the two are now team-mates), but to put it down to mere misfortune would be to overlook the often-central role that Higuain has played in his lengthy collection of near misses.

RECOMMENDED Pepe Reina: the semi-tragic tale of a keeper in all the right places at the wrong times

He scored 10 goals in 13 qualifiers to get Argentina to the 2014 World Cup, but it’s his snatched one-on-one in the final – when such openings were a desperate scarcity – that remains the most abiding memory. A year later, against Chile in the Copa America final, another knife-edge game was marked with Higuain stabbing his one chance wide and making sure of things by slicing over in the shoot-out.

Higuain’s propensity to undermine his own brilliance with final-hurdle failure was taken to extremes during the concluding fixture of last season, which was effectively a straight play-off between Napoli and Lazio for Serie A’s final Champions League place. Having scored a nine-minute brace to drag his side back from 2-0 down – and with Napoli’s momentum ramped up to full-throttle and the scoreline set to pivot completely – he rifled a penalty into the crowd. Lazio went on to win 4-2.

“Everyone takes a beating sometime,” as Henry Hill said. But at that point Higuain could be forgiven for wondering why his persecutions seemed to be so much more sadistic and frequent than most.

Depending on your willingness to bestow the benefit of the doubt, this amounts either to evidence of a fragile temperament inherently unsuited to the game’s highest level, or proof of the thin, near-arbitrary line between the perception of success and failure in elite sport.

Bad luck or big-game bottler? Perhaps the next six months will offer conclusive evidence one way or the other. If the first half of the Serie A season is anything to go by, any sustained title charge will almost certainly be taken to the wire (Napoli currently lead Juventus, who have won their last 10 on the trot, by two points). And with Higuain supplying around 50% of Napoli’s goals, the club are heavily dependent on his continued heroics if they’re to keep chasing the dream.

What happens beyond this season is even less certain, but if recent history tells us anything it’s that when Europe’s heavyweights want someone, they tend to get him. Whether life as part of an ensemble cast at FC Hollywood would be especially fruitful for a player who has always thrived on being cast in a starring role is, however, in doubt.

For now, though, the forward who has so often ended up playing the bridesmaid rather than the bride has his eyes firmly fixed on the bouquet arching through the air towards him. And with Juventus’s stranglehold on Serie A verging on the monotonous, it’s not just the died-in-the-wool romantics who’ll be hoping his catch doesn’t fail him this time around.