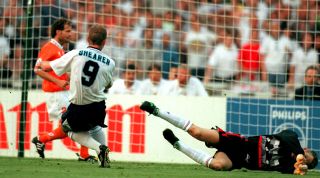 The new issue of FourFourTwo is a Euro 96 special, as we gear up towards this summer's Euro 2020 tournament – with games in London, Glasgow and Dublin.

The magazine isn't in shops until Tuesday, but you can pre-order it right now and get it sent straight to your door.

To get you in the mood, we thought we'd test you on the famous 4-1 victory against the Netherlands, who had gone into the summer among the favourites. The smashing win on home soil still has a special place in the hearts of England fans – but can you remember the men Terry Venables and Guus Hiddink selected that day?

Eight minutes are on the clock for you to name the starting XIs (plus the three substitutes both sides used). Give it a go below, let us know how you get on @FourFourTwo and please share it with your mates at the same time. Geluk!

THEN TRY Quiz! Can you name Jose Mourinho's last 30 signings?

While you're here, why not take advantage of our brilliant subscribers' offer? Get the world's greatest football magazine for just £3 for the first 3 issues. Cheers!