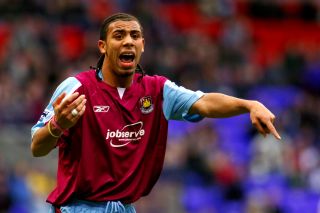 Nickname
It was always just Ant or Anton when I was growing up, but for some reason I've become known as 'Lips' by the boys at West Ham.

As a boy I supported...
West Ham. I've been at the club since the age of nine and obviously my brother [Rio, of Manchester United and England] was here as well. Back in the day, I was a midfielder and used to like watching Paul Ince. I know he's not too popular with our fans but I can only remember him playing for Manchester United, Inter and Liverpool. A top player.

Strengths
My passing and reading of the game.

Weaknesses
I need to improve on everything. In the Premiership, you need to be thinking all the time because if you switch off for just one second, you will be in trouble. Opponents are better technically and the strikers certainly have more movement and spin off defenders much better. I've had to take my game to another level this season.

Heroes
I love to watch Maradona and Pele on video. They had so much flair and ability on the ball it was frightening. Rio is also a hero of mine; he's always been there when I've needed him for guidance and support.

Highlights
Helping West Ham to promotion last season will live with me for a long time. Not necessarily the Play-Off Final, but the victory parade the following day. It was then it struck me just what it meant to our supporters to be back in the big time. Making my under-21 debut for England against Ukraine was also special. We won 3-1 and I had all my family watching at the Riverside.

Lowlights
Seeing West Ham relegated in 2002-03. While I only made the bench once that season, I was still in and around the squad and it was heartbreaking when we finally went down.

Best player played with
My current defensive partner Elliott Ward. We've played together since the age of 17 and have got to know each other's game so well. Elliott can be physical when he has to be, but can be just as effective playing the ball on the deck.

Best player played against
Alan Shearer. He's so good with his back to goal; likewise his movement off the ball. He has this tendency to pull off your shoulder and sometimes you just don't know where he is. We drew 0-0 at St James' Park but it was a massive test for me.

Most embarrassing moment
That was when I went on Soccer AM with Rio when I was only 12 or 13. I had a go at shooting the ball through the hole and missed by some distance. My mates gave me loads of stick when I got home!

Biggest practical joker
Bobby Zamora is always having a laugh and people like him make training enjoyable every day. He loves coming in early just so he can park his car in the gaffer's space.

School report
Just the four GCSEs, I'm afraid. I used to like music, PE and the sciences, but I always intended to become a footballer.

Wheels
I started out with a silver Peugeot 206 but I've now got a Chrysler 300.

Chicks
Jessica Alba, without any shadow of a doubt. I got to see her in person at the Sin City premiere but unfortunately never got the chance to talk to her.

Kicks
I love to sing in my spare time. I'm in the process of laying down a few tracks with my mates in Peckham and we'll see what happens. Please note I said 'sing' and not 'rap'. I leave that to Nigel Reo-Coker, when he's not forgetting the words!

TV programme
EastEnders – I've watched it since I was a little kid. I know Mohammed George who plays Gus, and also Perry Fenwick (aka Billy Mitchell). He's a big Hammers fan.

If I hadn't been a footballer...
I'd have been in the music business and possibly as a singer or backing vocalist. My influences are Boyz II Men, Jodeci, Usher and Craig David. I can also play the drums and I'm learning to play the piano.

In five years' time I'll be...
Doing well in the Premiership and hopefully playing for England alongside my brother.

Interview: Luke Nicoli. From the January 2006 issue of FourFourTwo.