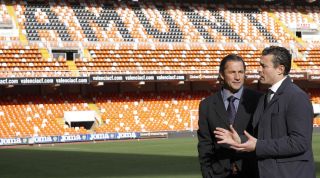 If you've been a grumpy chops all holiday because of the wrong phone/games console/sock size you received as a Christmas present, then feel some sympathy for poor Miroslav Djukic.

Sacked just a couple of weeks before the winter break, having struggled to tame a rebellious dressing room and handed a transfer kitty as empty as LLL’s bank account, the former Valencia boss is now having to suffer stories of a possible multi-million euro takeover by a billionaire promising funds a’plenty to bring in reinforcements.

That potential benefactor is Peter Lim, a Singapore man of man of billions who has made an offer to buy the club, a proposal still being pored over as potentially being too good to be true. That offer would take over the club's shares, clear the debt and provide funds to rebuild the stadium, as well as offer up to €30-40m in the coming transfer window. The restocking of the club stationery cupboard is also on the cards.

All in all it's a figure approaching half a billion by the blog’s calculations, such is the financial basket case that is Valencia these days.

Due to the complexities of the messed-up club's ownership, which is largely held by Bankia and a mixture of private shareholders, Valencia are being very forward in announcing that any sale process would be transparent and open. “The offer remains on the table until January 15,” advised club president Amadeo Salvo on Monday.

Should the deal go through and the offer from the Far East turn out to be as astonishingly good as it sounds, the manager who will benefit from this largesse is Juan Antonio Pizzi, the former Valencia and Barcelona player who cut his ties with San Lorenzo in Argentina to jump aboard the good ship Mestalla.

Argentine colleagues of LLL note with approval that the 45-year-old did a fine job of turning around another messy club by winning the first half of the country’s league title (a system that still baffles LLL).

So, in theory, Pizzi should be perfect for taking over a Valencia team in 11th, 13 points from the Champions League places, which is where they need to be to attract any half-decent players in seasons to come. “When I got to San Lorenzo in October 2012, the situation was far worse,” said Pizzi promisingly in his presentation.

To continue the hypothetical nature of this entire buy-out, one of Lim's targets is Edin Dzeko, according to the Spanish press, to boost a forward line that currently consists of Jonas and not much else. No offence, Helder Postiga. The bare facts show that this season Valencia have scored 23 league goals fewer than Atlético Madrid, a side supposedly equal to the Mestalla club.

They ended the run-in towards the winter break rather badly with just two wins from 10 games, but there is a chance to pick up nine points from nine over the next three matches with clashes against Levante, Celta Vigo and Málaga. But, with the chance of a considerably brighter future coming to halt a pretty miserable spell for Valencia, all focus is now directed off the pitch and a potentially huge winter windfall.