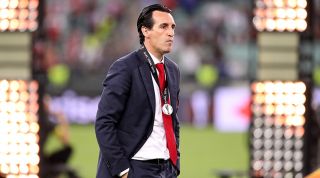 Arsenal have been given a bizarre fixture date and kick-off time for their Europa League group game at Portugeuse side Vitoria.

The Gunners were drawn against their Portuguese opponents alongside Germany’s Eintracht Frankfurt and Belgian club Standard Liege in the Europa League group stage draw a fortnight ago.

UEFA have arranged for Unai Emery’s side to face Vitoria on a Wednesday afternoon, however - November 6 - with the kick-off time scheduled for 15:50 (local and UK time).

Europa League matches usually take place on a Thursday at either 17:55 or 20:00, but two teams from the same region cannot play their home games on the same date. For broadcasting purposes, meanwhile, matches can't clash with their Champions League equivalents.

Fellow Primeira Liga side Braga, who are only around 20 minutes away from Vitoria’s home stadium by car, are scheduled to host Besiktas on Thursday, November 7.

Therefore, Arsenal’s fixture has been brought forward to reduce fan congestion and maintain safety regulations in the Braga-Vitoria area.

This is not the first time that Arsenal have had their Europa League matches moved due to a clash in venue. Last season, UEFA reversed the home and away legs of the Gunners’ last-16 and quarter-final clashes with Rennes and Napoli respectively, due to a clash with Chelsea’s home fixtures in the same competition.

The north London side went toe-to-toe with their west London neighbours in last season's final but were defeated 4-1 by the Blues in Baku, Azerbaijan.

That win granted Chelsea access to the Champions League for 2019/20, and Unai Emery’s Gunners will be hoping to emulate their Premier League rivals after three years away from Europe’s premier club competition.

ANALYSIS Erling Braut Haaland is the latest young star to be chased by Europe's elite clubs. He shouldn't go to any of them