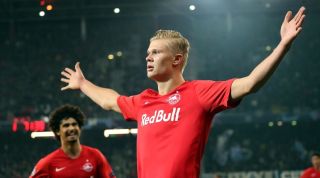 On Tuesday night, Erling Braut Haaland will step out underneath the bright European lights again, as his RB Salzburg travel to Italy to face Napoli.

Haaland had a strange October, ending the month in the unusual position of having scored more goals in the Champions League than the Austrian Bundesliga. Three to one, for those keeping count, in spite of the obvious differences in quality. But it’s that continental tally which instructs his current status in the game. His six goals in three games has minted him as 2019’s must-have item among the elite clubs, with as many as 20 sides hoping to secure his services.

It’s the kind of clamour which has become an annual part of football’s calendar. There is always this player. It was Joao Felix last year, Frenkie de Jong the year before and Renato Sanches in 2016.

The process, as Haaland is finding out, is established enough to be formulaic. A young player separates himself from his age-group peers, his performances attract enormous attention, and then it’s determined that he must move to the very top of the game as quickly as possible.

Already his fourth hat-trick of the season and he's only 19 pic.twitter.com/WqC9mX14ss— Football on BT Sport (@btsportfootball) September 17, 2019

Reliably, Haaland has been on steady gossip column rotation since his hat-trick against Genk back in September. That reflects two things: firstly, the digital media’s transfer lust, but also - given the identity of the clubs he's connected with - the haste with which footballers of his profile are now being shunted towards the sport's summit.

There’s no better caveat for that than the most obvious of metaphors. When climbing to great heights, the process is best undertaken in stages. Metre by metre, with pauses in between which allow the body to adjust.

Adjusted for footballing specificity, that preaches against these quantum leaps in status and suggests that, actually, a career is put in less jeopardy if it’s not exposed to sudden and dramatic change. For the metaphorical attrition of the weather and thinning air, read growing press coverage, fan expectation and the psychological harm of being deemed a waste of money.

In a recent column for The Athletic, David Ornstein revealed that, so inundated with pleas to join the club had he become, Haaland has recently had to leave a Manchester City Facebook fan group he belonged to.

In recent interviews, reports Ornstein, Haaland has also begun to verbalise his frustration with the atmosphere that surrounds him, describing it as a "boring" and rating the tedium "9.9 out of 10". Which, when it’s considered how exciting his life should be at the moment, is a crying shame.

The second conclusion to draw, though, is that this situation has been created by a distortion within the market. The astronomical wealth of the true financial predators – Paris Saint-Germain, Manchester United and Manchester City – has convinced clubs to pay premier fees for half-formed players. The fear being that if they don’t, if those players make bridging moves to a level of the game more commensurate with their talent and experience, their valuation would rapidly become unrealistic.

It might be a situation which appeals to the young player (and invariably to his commission-hungry agent), but it isn’t necessarily in his best interest or, perhaps more importantly, nor does it serve football’s general health.

That second point is crucial, because it does feel now as if these players streak more quickly across the sky than ever before. A Luka Jovic type, for instance, is allowed two seasons at Eintracht Frankfurt before being defaulted into the Real Madrid hothouse.

Haaland, inevitably, will follow him. Perhaps not to Madrid, but almost certainly to a situation in which he’s expected to be fully-formed, and where – sadly – his understandably rough edges will likely cost him game time. But he’ll be elevated to that level because that club, whoever it may be, will want to keep him out of reach. They'll want to place him on football’s highest shelf as a precaution, not necessarily because he belongs there.

The potential for damage to him is obvious, that cautionary article has been written many, many times before. The more subtle cost, though, is seen in football's middle, where this commodity culture creates such a diluting effect. Fans used to be able to enjoy a player’s interim period for longer, knowing that, while inevitable, his eventual transfer into the stratosphere would only happen after something had been proven or a trophy had been won.

Nice things are not allowed to exist in places which are deemed financially ordinary and whether that really suits the players involved is, at best, a secondary concern.

COLUMN The Liverpool comebacks – how do they force opponents into late errors so often?

QUIZ Can you name the 32 players with most touches in the Premier League this season?