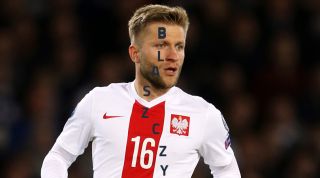 Ukraine will be looking to do the rare Eurovision and Euro double – a feat last achieved when ABBA won both in 1976 – but the quality of football has improved a lot since Agnetha Faltskog danced past the Dutch defence and fired home her famous winner.

Northern Ireland will look to surprise a few people, mostly by not being the Republic of Ireland, while Poland will make an ultimately futile attempt to hold out against German advances.

Germany will win the group and the competition.

All 24 Euro 2016 teams profiled, plus must-read features with FourFourTwo

Poland will again hope markers struggle to get to grips with their lengthy, consonant-heavy surnames. Jakub Blaszczykowski’s name didn’t fit on the back of his shirt so has to be written across the length of his entire body, from a B on his forehead through to the I on the back of his ankle.

Germany’s squad is so strong that Jogi Low was able to pick Lukas Podolski simply to translate chants for him during the Poland game.

Martin O’Neill will continue to manage both the Republic of Ireland and Northern Ireland using his popular ‘Michael O’Neill’ persona and simply removing his glasses when in charge of the Northerners.

Jogi Low will once again wear a cardigan regardless of the conditions, and has been training at high temperatures to ensure he doesn’t need to unbutton should a game go to extra-time.

Mykhaylo Fomenko has a 70% win ratio as Ukraine boss so can be expected to win 2.1 matches in the group stage, followed by 0.7 of a second-round game.

Back of the Net expert tip

Withdraw your month’s spending money in cash rather than using your card – you’ll find it helps you cut down your spending.