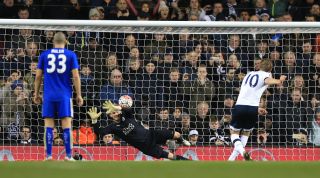 Tottenham would have been furious to come away from White Hart Lane with a defeat, but for a large chunk of the second half it looked like those emotions may well have ruled.

Mauricio Pochettino’s side controlled possession for the vast majority of the game and were generally allowed to do as they pleased with the ball when playing out from the back, but Leicester’s resolute and deep defending through the middle meant Son Heung-min was never really allowed to get behind the Foxes’ backline and as such was often forced wide to look for his chances.

Spurs looked strong down the flanks where there was more space, but the resulting batch of balls into the box were well dealt with by Leicester and left Spurs without much of a Plan B. They picked up their Get Out Of Jail Free card when Nathan Dyer was judged to have handled inside the box late on, but Pochettino may well wish he’d seen a little more skilled craft from the likes of Christian Eriksen and youngster Josh Onomah.

“We deserved more but we need to be happy because we’re still alive,” opined the Argentine post-match.

2. Foxes: give up the Kane bashing

… because it only ends in more hurt. The England frontman was greeted with the usual chorus of boos from a travelling mob who didn’t see the best of him during his 2013 loan spell with the Foxes, only to then watch him have the audacity to blossom into a rather ruddy good Premier League striker.

Kane in turn netted the 89th-minute penalty (his 50th for the club) that earned Spurs a King Power replay – and it wasn’t the first time that the 22-year-old has broken Foxes hearts since leaving them after play-off heartache. Leicester’s return to the top flight in 2014 also happened to coincide with Kane’s big breakthrough campaign in which he netted 21 league goals – four of them coming against the Foxes, who allowed him to score once on their own patch and then gifted him a hat-trick in a 4-3 defeat at White Hart Lane.

Sunday’s strike was just the latest episode in a bitter series – one of his nine Millwall goals on loan in 2011/12 came in a 2-1 win over Leicester too – but it’s time to let the hatred go for their own sakes. They might well be cheering him on in France this summer, after all.

Demarai Gray had only enjoyed three days’ training with his new team-mates following a £3.7m move from Birmingham, and playing behind him at White Hart Lane was Ben Chilwell, the Foxes’ teenage left-back who has reportedly attracted Liverpool and Arsenal’s interest after a promising loan spell at Huddersfield under Jurgen Klopp’s former coach at Dortmund, David Wagner.

Both 19-year-olds vindicated Claudio Ranieri’s decision to include them from the start here, with the inexperienced Chilwell letting virtually nothing past him in his biggest game yet and Gray looking bright from the off.

There’s still plenty of work to be done off the ball – Ranieri was often seen barking instructions at Gray when Leicester didn’t have the ball – but it was his terrific corner that Marcin Wasilewski headed in for the equaliser. He improved as his team did in the second half following their half-time switch to 4-4-2, providing a positive option on the left wing when his team needed it.

“Our left flank was 19 and 19 [years old]; I think they have a very good future with us,” Ranieri noted cheerily in his post-match press conference. “We showed my players can replace the others. You imagine: eight new players but I didn’t see a big difference, they played very well.”

4. No Vardy… but almost a party

It’s impossible for Leicester to play the same way without their talismanic striker, whose minor groin surgery kept him out of this one, and in the first half Leicester struggled without him. Lone hitman Leo Ulloa cut a frustrated and ineffectual figure on his own with little support, and it was odd to see the Foxes give Spurs such an easy ride when their defenders had possession.

Vardy’s tireless running is usually backed up by Marc Albrighton and Riyad Mahrez, but with new boy Gray on one wing and the less industrious Dyer manning the right, Leicester didn’t pack their usual punch on the frontline. That was, until another of Ranieri’s timely tactical tweaks changed the game in their favour.

Shinji Okazaki’s half-time introduction was necessary for the visitors to shock Spurs, and it paid dividends two minutes after the restart when the Japan international weaved past Tom Carroll and then Toby Alderweireld before poking the Foxes in front after his initial effort was saved by Michel Vorm.

The striker is adored by Ranieri for his tireless effort and knack of bringing others into play – Ulloa and Gray certainly benefited – as the Italian noted. “Okazaki knows very well what I want,” said the Leicester boss. “I prefer him [over Andrej Kramaric] to link the strikers with the midfielders.”

Vardy is set to return when the two sides lock horns again at the Lane on Wednesday night. “Today I think was 50-50, he had some training with the physio,” his manager confirmed. “Tomorrow with us [training]. Tuesday will be the last training session. If he’s OK, he will play.”

5. Townsend and Kramaric surely on their way

Pochettino refused to confirm whether Andros Townsend would be leaving White Hart Lane this month, or if the club had received any offers, after the winger was left out of his squad entirely amid a mooted loan move elsewhere.

Ranieri was a little more forthcoming about Andrej Kramaric, who also failed to make the cut again for Leicester. The Croatian has started only six Premier League matches since joining from Rijeka for around £8 million this time last year.

“If he stays I think he loses another six months,” admitted the Italian. “I’ll speak with him. If he wants to stay, fantastic – he is a fantastic striker. But it’s difficult in my team [to get in].”