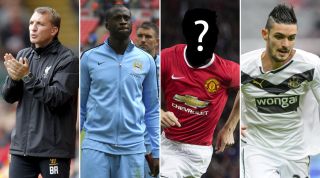 Liverpool are out to repeat last season’s title challenge, if possible without the devastating late capitulation that will haunt everyone involved for years to come. They will have to do without Luis Suarez, whose goals will be missed, but also his affable, humble, dedication to the cause.

Manager: Brendan Rodgers has brought tactically advanced, entertaining football back to Liverpool but is under pressure to make his team more ruthless after infamously shipping three late goals to Crystal Palace at a crucial stage in the season because their players looked sad and couldn’t afford a nice kit like theirs. The Liverpool boss has confessed that Louis van Gaal was his idol and we can expect him to imitate the Dutchman’s toupee-esque hairstyle.

Key clash: Southampton, 17th August. The addition of all of Southampton’s players to the squad has helped give Liverpool more strength in depth and could give them the upper hand when they come to face Southampton.

If they were a spice they would be... Turmeric.

Prediction: After last season’s overachievement, Liverpool will be brought back down to earth. Unable to fill the void created by the departure of Luis Suarez, Rodgers’ side will lack a cutting edge too frequently and drop points in tight games. 7th.

The challenge for the reigning champions will be juggling their Premier League and Champions League commitments while also remembering to bake birthday cakes for key players. The true test will come next spring when the Champions League enters the knockout stage, the Premier League race hots up and Yaya Toure demands a jelly with his name on it.

Manager: As well as delivering the Premier League, Manuel Pellegrini has conducted himself with a quiet dignity and grace under fire that has won the disdain and suspicion of fellow managers, players and pundits alike.

Tactics: All of Manchester City’s 750 players are arguably potential match-winners and their success last season owed much to their ability to rest players for seven months at a time.

If they were a late Romantic chamber music movement they would be... Sergei Taneyev’s Piano Quartet in E major, Opus 20, Movement II.

Prediction: Eliaquim Mangala could struggle to adapt to English football and Martin Demichelis remains suspect in a side that can look fragile at the back on occasion. City will be spread thin in attempting to conquer Europe and won’t be able to maintain their grip on the Premier League. 7th.

Manchester United’s fans will look to Louis van Gaal to restore pride to a club that suffered humiliation last season. Van Gaal has already swung the axe in the Manchester United dressing room and may face an injury crisis should he need to call upon any of the victims.

Key player: Arturo Vidal / Juan Cuadrado (delete as appropriate) was the big-money move that United fans were praying for to invigorate their midfield. The Chilean / Colombian international will breathe new life into a midfield that was starved of creativity and fans will just be happy that the incredibly tedious protracted saga / incredibly tedious protracted saga of his signature ended well.

Last season: David Moyes was given the unenviable task of stamping his mark on Sir Alex Ferguson’s team, and he did so emphatically with fans universally agreeing his Manchester United was unrecognisable from United of old.

If they were a mannerism they would be… Frequent stealthy glances at the clock.

Prediction: Even Van Gaal won’t be able to deliver immediate results with a squad in transition, leaving United to face their worst season since the fateful 2013/14 campaign. 7th.

Newcastle have entered a period of stagnation and although Alan Pardew has been held accountable by many fans, he hasn’t been helped by poor transfer dealings. Despite the best efforts of Joe Kinnear, Newcastle’s only signing last season was an adopted panda, which remained in China although the club received photos to pin up on the fridge.

Last season: The season started well but the loss of Yohan Cabaye in January and Pardew’s subsequent descent into nihilistic existentialism, followed by his headbutting phase, saw fans become so enraged that many put their shirts on in protest.

Star signing: Newcastle will be hoping that they can finally replace Yohan Cabaye with Remy Cabella, who is the supermarket own brand of Cabaye, without anyone noticing the difference.

If they were a font, they would be… Courier

Prediction: Pardew’s shrewd signings will succeed in erasing the memories of a testing 2013/14 season, but the squad will narrowly lack the strength in depth necessary to kick on into the European qualification spots. 7th.