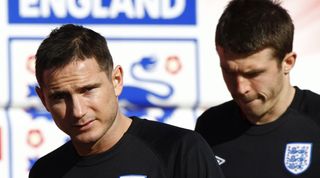 Despite showing no interest in outdoor pursuits until now, Michael Carrick is suddenly determined to schedule an ‘adventure day’, Chelsea midfielder Frank Lampard has revealed.

Yesterday afternoon, Lampard was surprised to find he had a string of missed calls and text messages from Carrick, a man he would describe as an acquaintance rather than a friend.

“I was kind of worried something might be wrong when I saw all those missed calls, so I guess I was slightly relieved when it was Carrick asking if I wanted to go on an ‘adventure day’,” Lampard told FourFourTwo.

“It’s a bit weird because we don’t really hang out as friends, plus I didn’t realise he was really into that kind of thing but he was adamant I had to try bungee jumping, paragliding, rock climbing and quad biking.

Carrick’s invitation so far appears to have received a muted response, prompting the Manchester United man to suggest some alternative activities such as attending a circus skill workshop, volunteering to help at a knife-throwing demonstration or a friendly kick around with some Stoke players.