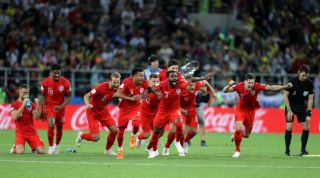 Here we were, once again. The stomach-churning, chain-smoking, nail-biting business end of a World Cup.

Having started the competition so well, England's defeat to Belgium checked the native enthusiasm. Qualification had been secured by then, making the decision to rest players entirely rational, but it also prevented them from being placed in any sort of context. How good actually are they?

Unsurprisingly, Gareth Southgate was left unmoved by what he saw against Belgium. The side picked was the one which started the Tunisia game and, with Dele Alli fit again, clearly his first choice. Ashley Young retained his place in spite of the natural width offered by Danny Rose and Raheem Sterling was restored to the top of the formation. Up until this point, Colombia's centre-halves had spent the tournament showing their aerial threat but, in Yerry Mina and Davinson Sanchez, Southgate evidently saw a partnership vulnerable to movement. That ultimately wouldn't show, but the theory was clear enough.

It was a bold selection, too. Attacking-midfielder Juan Quintero had been one of the players of the tournament, but Southgate resisted the urge to buttress his midfield with Eric Dier. Instead, Jesse Lingard began the game, seeking to give England some forward movement from deep. That certainly did work. While England began to sit deeper in the final stages of the game, they played most of it on the front foot.

It was aggressive. In both 2014 and 2016, reticence was at the root of early elimination, with Roy Hodgson's double-pivot making England one-geared. The lesson learned, seemingly, is that there's no point in going to an international tournament if you're too afraid to compete.

Early on, England did compete. As notable as the change in atmosphere around the team has been, they're really distinguished by their style. Failings of old have gone, the ball is no longer an enemy, and Southgate's players showed willingess to pass their way forward from defence, and then in and out of congested areas. England remain flawed, but they are at least now modern. In fact, the energetic Colombian press - which would so obviously have flummoxed previous generations - was encouragingly ineffective.

They were cut effectively and often. The passing avenues into midfield were found and England had little trouble moving up the field. Harry Kane headed an awkward chance up and over after a Lingard dart and Sterling found pockets of space, too. In the first half, advancing into the final-third proved more difficult, with Colombia collapsing quickly behind the ball, but the possession phases were largely neat and productive - even if they didn't ultimately carry much threat.

The first half finished goalless, but it should also have ended with Colombia down to ten men. From a well-position free-kick, Henderson clashed with Wilmar Barrios. The Liverpool midfielder may have collapsed with a hint of drama, but replays showed a clear headbutt. Referee Mark Geiger saw enough to give a yellow card, but not enough to reach for his back pocket; one of VAR's key purposes is to assist with that kind of decision and yet, somehow, Barrios remained on the field.

As the half wore on, the game deteriorated. Colombia were intent on rough-housing certain England players and drawing a response. All fair in a World Cup perhaps, but the barge on Sterling as he left the field - delivered by a member of Jose Pekerman's coaching staff - was one of the competition's uglier moments. It wasn't great and, presumably, the FIFA fine is on its way.

It was an odd approach, too. Pekerman is hardly short of talent and yet all the expression shown against Poland was parked in favour of something far less appetising. Having seen their opponents create little, they even gifted them the game's first goal: Carlos Sanchez wrestled Kane to the floor at a corner and, after issuing countless warnings, Geiger's patience ran out. Kane scored the penalty and Colombia were behind.

The whole tone of the performance was extrordinary. Breaking an opponent's rhythm is one thing, but sacrifcing your own stability for the sake of settling personal scores (during a World Cup knockout game) is quite another.

Doubly so, because with time running out and urgency refocusing their football, they grew more dangerous. Yerry Mina would equalise in stoppage-time, rising highest to head down and in, but it came from Colombia's only concerted effort to actually play. In the end, with the game headed for extra-time, England might have been glad for their opponent's wavering focus.

But England are emotionally fragile no more

In the end, as ever, penalties. This how it must be.

It's hard to escape the conclusion that this was more of a war than a football match. We learned that England can stay on the right side of the referee, can keep their tempers under severe provocation and, to their credit, survive to recover a fatal-looking extra-time tailspin.

It's not a time for cold analysis or dispassionate evaluation, but a moment instead to bathe in the catharsis and allow some of that hurt to drain away. Colombia are done, England advance.

The World Cup day began as they always seem to, with an ugly tabloid headline which turned the opposition into the neutral's choice. During Euro' 96, with The Mirror attempting to hire Spitfires and tanks, the Foreign Office actually had to step in to prevent an escalation. More than two decades later, the gurning face of jingoism reappeared to show just how little has been learnt. It was also a shame that an England effort that had, until that point, been characterised by cheerful enthusiasm, was needlessly interrupted by the snide tone.

“It’s rather sad that they use such a festive and friendly environment as the World Cup to target a country and continue to stigmatise it with a completely unrelated issue."

The Colombian ambassador was right. This might be a new kind of England team, one full of likeable and humble players, but the ugly fog which descends around them every few years remains annoyingly familiar. One imagines, also, that Harry Kane was less than enthused at being used as a stage-prop for that charmless theatre.